What’s Up With Those Southern Beasts? 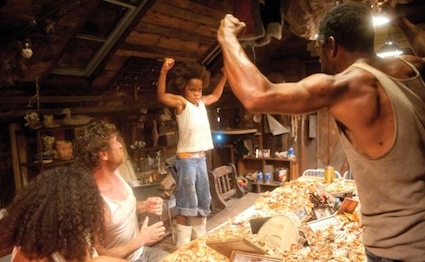 By Dudley Cocke
Storytelling is a partnership between the person telling the story and the person receiving the story; each depends on the other. This exchange is not designed to be passive, unless the purpose is propaganda. “The purpose of art is to lay bare the questions hidden by the answers,” wrote James Baldwin. Likewise, isn’t such questioning an important part of the artist–audience exchange? And isn’t the measure of the energy of such exchange an indicator of a culture’s vibrancy?
A new film, Beasts of the Southern Wild, furnishes an occasion to test this assertion. Beasts is the latest film fantasy about the rural South. I think it’s a depressing film, so I’m wondering why millions of viewers and the critics find it so exhilarating. A.O. Scott’s review for The New York Times is typical, “a blast of sheer, improbable joy.” Philip Martin writing for The Arkansas Democrat-Gazette seems to suggest that anything less than total buy-in is unpatriotic: “Wild is … a visual tone poem. To try to impose any orthodox sensibility, much less political correctness, on the film is close to blasphemy.” Obviously, the movie has struck a mass emotional chord; as one of a handful of naysayers, what’s my problem?
Beasts of the Southern Wild is the story of six year old Hushpuppy. Deserted by her mother when she was a baby, Hushpuppy is being raised (jerked up is more like it) by her abusive, alcoholic father, Wink, who appears to think she is a boy, the fabled Man Child come as the Redeemer of the least among us. For her part, Hushpuppy tells us, “I can count on two hands the times when I’ve been lifted up,” and she means held in someone’s arms. (For a detailed analysis of the Hushpuppy character’s lineage in popular culture, see bell hooks’ commentary “No Love in the Wild”.)Beasts is in a line of popular movies about the rural South that includes Deliverance (1972) all the way back to D.W. Griffith’s silent The Harum-Scarum and the Mountain Idealist (1909). The music in Paramount’s candy-colored Li’l Abner (1959) was nominated for an Academy Award. The opening number:

Soloists: It’s a typical day
In Dogpatch, USA.
Where typical folks
Do things in a typical way.
First we rubs the sleep from our eyes,
Gets our grub, and shoos ‘way the flies.
We spend what’s negotiable,
Then we gets sociable,
Sittin’ around swappin’ lies!
And then we drops by to collect unemployment pay!

All: Which leads us to say it’s a typical day
In Dogpatch, USA!

Both: We livin’ an’ sleepin’ n’ doin’ housekeepin’ in big subterranian cave!
While Kickapoo Joy Juice we make’um is heap “grade A!”

Skraggs: Take us boys what’s known as the Skraggs,
Mammy said she had us as gags!
Can’t git that depressin’ an’ homely unlessin’ ya comes from a long line o’ hags!
There ain’t any widders or orphans we won’t betray!

Moonbeam: Howdy boys, I’m Moonbeam McSwine,
Sleepin’ out with the pigs is my line.
The fellas admire me,
But they don’t squire me
Unless the weather is fine!
But I does alright when the wind blows the other way!


Fast forward more than half a century and the cartoonish Dogpatch has morphed into the Bathtub, something more akin to a graphic novel and now located near the southern Louisiana levees. Like the characters in Dogpatch, po’ folk in the ‘tub have the “typical way,” drinking from dawn until they collapse – plus now they have the added headache of the approaching Apocalypse set off by global warming. Thirty years before the Beasts, Hank Jr laid down the survivalist anthem:

The preacher man says it’s the end of time
And the Mississippi River she’s a goin’ dry
The interest is up and the Stock Markets down
And you only get mugged
If you go down town
I live back in the woods, you see
A woman and the kids, and the dogs and me
I got a shotgun, a rifle, and a 4-wheel drive
And a country boy can survive
Country folks can survive

So who feels exhilarated by a film that appears to be a grab-bag fantasy about the end of time, poverty, and alcoholism? I hope rural Southerners, despite some affinity for the Book of Revelation, know too much about themselves to swallow the concoction. With more than 2.1 million Americans in prison, there’s no easy way for people who are part of communities with modest incomes to gloss the damage done by drug and alcohol addiction. Ask the school teachers here in Appalachia, and any one of them will tell you about the real-life fates of neglected and abused Hushpuppies.
Is the film, then, thrilling, “a blast of joy,” for penned-up, pent-up middle-class suburban and urban people ready to break free into a hedonistic wild? If this is the case, are rural people and their tourism bureaus prepared to fulfill this urban fantasy? In an era when pop culture and cosmopolitanism appear to be synonymous, what do rural people actually think about the way they are being portrayed in today’s mass media? Have the relentless stereotypes of popular culture finally hypnotized us all, rural and urban alike, erasing any sense of history and present reality so at any given moment we’re liable to turn into a caricature of ourselves? I realize these are heady questions when one could just relax — hey dude, it’s just a movie. Meanwhile, tens of thousands are lining up to feel the beast, the hype is on, and I wonder what the fervor signifies.

Dudley Cocke is the artistic director of Roadside Theater, the professional theater wing of the multi-media arts and humanities center, Appalshop, in Whitesburg, KY.