Where The Mountains And The Movies Meet 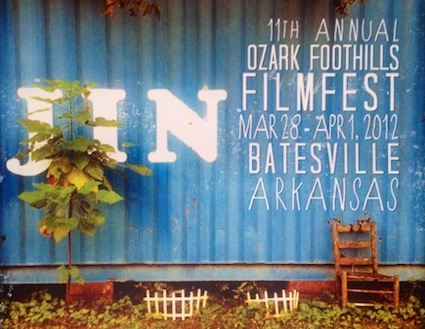 By Rachel Reynolds Luster, Contributing Editor
Batesville, Arkansas sits nestled in the Ozark foothills. The town is small with a population hovering between nine and ten thousand and is primarily known as the home of NASCAR driver, Mark Martin, and the nearly-famous alternative metal band Mutha’s Day Out. However, the town also hosts what Arkansas Times editor Lindsey Millar suggests “may very well be the best small festival in the country.”

With the slogan Where the Mountains and the Movies Meet, Ozark Foothills FilmFest offers five full days and nights of public screenings as well as workshops and forums on all aspects of the art form. Filmmakers and actors are often in attendance, and audience members are treated to lively question and answer sessions following each viewing. While festival organizers have used the event to encourage and promote a home-grown film industry, the festival is a bonafide international event with filmmakers coming from as far away as India. The festival hosts many films and filmmakers showcased at more recognized film festivals such as Cannes and at SXSW. 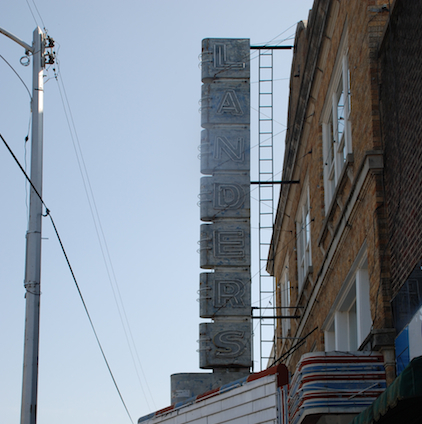 The Ozark Foothills FilmFest was the brainchild of husband and wife team Bob and Judy Pest. Bob had been working for AETN, Arkansas’s public television network, and the couple also worked with Arkansas’s other world-class film event: the Hot Springs Documentary Film Festival. They formed a local non-profit in 2001 and went to work, against all odds, as Bob Pest explained to me, to encourage and “grow their own” film community in the state. The pair partnered with the local colleges as well as other community partners including local banks to “float” the festival in those first years with a mission of supporting emerging young filmmakers in Arkansas and the surrounding area — and creating a world-class event in the state.

The restored Landers Theater in Batesville, one of four Filmfest locations in town
In 2007, the festival received a crucial boost when it became one of the supported models for expansion for a creative economy study funded by the Arkansas Arts Council and the Winthrop Rockefeller Foundation. The program offered additional funds to bring in consultants, including filmmakers and organizers from Appalshop, and to develop T-Tauri: a two-week camp for aspiring filmmakers, actors, editors, and screenwriters between the ages of 7 and 18. The organization also created a year-long presence for T-Tauri through the T-Tauri Galaxy, an online collaborative site where students can post their work and contribute to the work of their colleagues as well as a bank of public domain material that anyone can access through the online galaxy space. T-Tauri loosely translates as “new star.”

There’s a large contingent of young filmmakers present at the festival as well, a scene that’s been nurtured by both Bob and Judy. Not only has the festival supported young filmmakers by featuring their work, but it also offers funding to support their projects —  a unique opportunity for emerging artists,  especially those from rural places. In addition, there are sessions which deal directly with the challenges of making films in Arkansas, Texas, or Louisiana, for instance, rather than Los Angeles. There’s a young and devoted class of filmmakers dedicated to making the movies they want to make where they want to make them, knowing that this often means little distribution or support from investors. 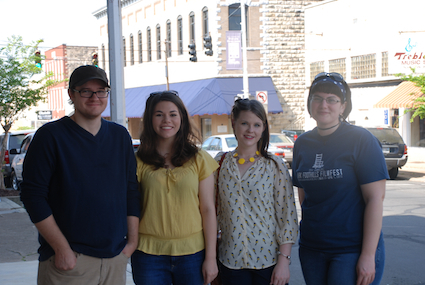 Jonathan Hicks, Robyn Rebecca Lynn, Mandy Maxwell and Juli Jackson outside the Festival
The Ozark Foothills FilmFest offers two screenwriting awards for best short and feature length screenplay, and they offer three $30,000 production grants for films that are required to use at least 75% Arkansas cast and crew. This year’s works in progress were all screened at the festival. Follow-up articles will highlight two of them: Witch Hazel Advent by Sarah K. Moore and 45 RPM by Juli Jackson, who not only was production grant recipient also has been an enthusiastic volunteer for the festival for the last few years. The FilmFest also partners with local arts agencies to support a competition for emerging visual artists to create the festival’s yearly poster design and exhibit their work in a local gallery during the festival. This year’s poster competition winner was Mandy Maxwell.

Bob and Judy Pest have proven masterful at not only having the vision to create such an event in a rural Arkansas town, but also at building the community partnerships that are necessary to maintain and expand the project. Despite hundreds of thousands of dollars of foundation funding, the FilmFest is still headquartered out of the couple’s home; they have chosen to thrust the funding support back into the festival, their youth engagement programs, and the community. The Ozark Foothills FilmFest has encouraged a coalition of local cultural non-profits, and worked with their local Main Street program and regional tourist council, to demonstrate how film can serve as a significant tool for cultural (and economic) development in Batesville, the state, and the region.