Work is Art and Art is Work 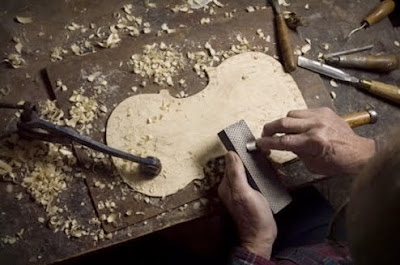 photograph from Bernard Allen’s workshop by Rita Reed
For nearly three decades, The Missouri Folk Arts Program has been working to celebrate and document their state’s folk culture, while also offering exhibitions and apprentice programs so that a new generation can have the opportunity to carry forward these arts. Their Traditional Arts Apprenticeship Program has, in its twenty-five year tenure, worked to bring new practitioners to all fields of folklife–from music to dance to the occupational arts–and these apprentices have had the chance to work with “over five hundred individual traditional artists, many in underserved rural, inner city, and ethnic communities in every corner of the state.” To their credit, they see “folklife” with a wide-angle lens that recognizes the richness and variety of the state’s culture: apprentices have been given the chance to learn Sudanese ceremonial music, Native American ribbon work and well as how to make box turkey calls.
There’s an ethic to the program that draws no distinctions between “aesthetic” and “practical” acts, but sees them as interrelated experiences–one feeding into the other. This is the notion that informs their Work is Art and Art is Work online exhibit, an expansive series of online slideshows and videos that consider how “the visual and aural art of luthiery – the intricate craft, repair, and restoration of stringed instruments – is central to musical expression.” Here’s is an excerpt from the exhibit’s introduction:

By the 1860s, St. Louis was home to multiple small luthier shops and two manufacturers of stringed instruments. Perhaps Missouri’s most influential manufacturer was the Schwarzer Zither Factory founded in 1866 in Washington by an Austrian immigrant. Employing German craftsmen, he developed award-winning, innovative, and elaborate instruments that are still admired for their quality. Luthiers were needed in isolated rural areas, too. Local musicians often served in that role, as a sideline to their primary occupations. Periods of economic hardship required creative solutions, so instruments were strung with braided horsehair or screen wire, and fiddles were created from recycled cigar boxes and other found wood.

Research in the archives of the Missouri Folk Arts Program uncovered a tribute to the late Cope Ashlock, a luthier who once operated The Violin Shop in downtown Columbia. He printed a telling motto on his business cards: where work is art and art is work. Ashlock’s philosophy aptly describes the dominant theme in this exhibit – building instruments by hand is an art, and creating art requires skill, precision, and lots of hard work.

Today, despite the ready availability of mass-produced stringed instruments, luthiery remains a living art form in Missouri. As mandolin maker John Wynnstresses, “Putting together a mandolin from a kit is not instrument making; it’s assembly. I make every part and decorative feature of my mandolins from beginning to end. I take pride in the quality of my work.”

The exhibition reveals not only the physical artistry of luthiery, but a series of cultural connections that always run alongside the course of the chisels and planes that give shape to these instruments. Work is Art and Art is Work features six luthiers (each has also worked in the Apprenticehip Program) in multiple slide shows, and also in lengthy video interviews, where we have the chance to hear the artists in their own words.
Tweet