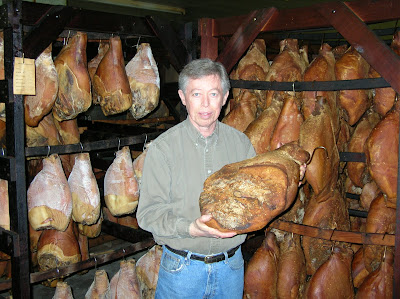 By Ian Halbert
Recently, Mary and I ate at a local restaurant we both love – Hungry Mother. The concept is something of a cross-section of a number of different food trends popular at the moment (and, with hope, for good): locally sourced, organic products; “slow food” cooking methods; traditionally humble, regional dishes refined with a gourmet edge. In essence, Hungry Mother is the grand product of a chef classically trained in the French tradition returning to recreate the dishes of his rural Virginia youth – boiled peanuts and all.
On our last visit, we had a charcuterie plate which featured some house-made meats and some sourced from a third party. On the plate was a particularly tasty smoked ham. I asked the waitress its origin and stumbled into Allan Benton.
After reading around, I found Mr. Benton to be a particularly interesting and engaging fellow, who apparently makes some mean bacon in addition to his hams: his bacons and hams are featured in many very well-known and well regarded restaurants, including Tom Colicchio’s Craft and David Chang’s Momofuku. Essentially, Benton has married an Appalachian operation and its resources to the great traditions of European curing methods:
“I call it country ham, but I’m lying through my teeth. It’s just a curing process they’ve been doing for a thousand years in Europe. The way I see it, just because they live in Parma, or in Germany, or anywhere else, doesn’t mean that they can produce a better ham than a bunch of farm boys from Tennessee can.”
This marriage of the rich resources of rural Appalachia and the country culinary techniques of the old world have produced an outstanding product that is meeting the demands of chefs and diners looking for quality products close to home.
Read around on him (and here) and you will find someone alive with humor – “Yessir, I take my Crestor like everybody else” – and as much a product of his place as his pigs: “I can’t remember when I couldn’t make corn bread.”
We have consistently pointed toward the rural/urban divide, and the mutual support each lends to the other. While I am eternally grateful for Mr. Benton’s passion and devotion, the fact is he should not be as rare as he is: there is much more pork in this country that could use a few months in salt and air. We must be careful not to romanticize what should, in reality, be normal practices for a healthy food culture. Please, don’t ever let me write something as unctuous as this:
A couple days ago, I received this text message from a friend: “At PDT in NYC drinking a Benton’s old-fashioned. Yes, it’s infused with our man’s bacon …”
Let’s get back to basics. Here’s a recipe for Benton’s “Red-Eye Gravy” you can find on the click-throughs also. You might as well order a ham from Allan for just such a dish:

Trim the fat from the ham slices. Put the fat in a large cast-iron skillet and set the ham aside. Cook the fat over medium heat until it renders, about 3 minutes. (If there isn’t much rendered fat, add the vegetable oil.)
Pour 1/4 cup of the coffee into the skillet. Add the brown sugar and stir until melted. Place the ham slices on top and cover the skillet with a lid. Cook over medium heat until wisps of steam come out from under the lid, then remove the lid and lightly brown the ham.

Transfer the ham to a warm plate and keep warm. Discard any remaining pieces of fat. Add the remaining 1/4 cup of coffee. Increase the heat to medium-high, and cook, stirring up from the bottom, until the gravy comes together and cooks down a little, about 1 to 2 minutes. Serve hot with the ham slices, as well as biscuits for sopping.