Bringing The Yarn Bomb To The Country 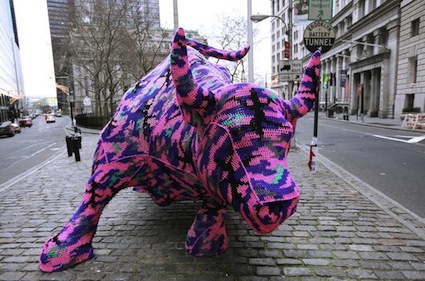 [Editor’s Note: As I am facing numerous writing deadlines over the second half of February, this seems like a good time to give a retrospective glance to the first two years of Art of the Rural. Over these weeks I will feature a few new articles, but also many favorites from the archives. Thanks again to everyone who has read and contributed; what began as a labor of love has become a project far larger, and far more rewarding, than I ever could have anticipated – and I deeply appreciate the readership and participation of such a diverse audience. In March we will offer new articles and series, and share some new projects related to our mission.
Bringing The Yarn Bomb To The Country was originally published on June 9, 2011. International Yarn Bombing Day is set for June 9th this year.]
By Rachel Reynolds Luster, Contributing Editor

International Yarn Bombing Day will occur for the first time this Saturday, June 11th. The event was the brainchild of Joann Matvichuk, a “domestic goddess” who lives and works in Lethbridge, Alberta. Her motivation is to encourage knitters and crocheters to perform crafted graffiti on the same day, around the world as a collective group.

For those not familiar with the concept of yarn bombing, it’s a form of graffiti and cultural activism that involves repurposing aspects of the urban landscape by covering them with knitted and crocheted adornments. The movement was started in 2005 by Texas artist Magda Sayeg. At the time, Sayeg was the owner of a yarn shop in Houston and was overcome with “a selfish desire to add color to my world.” In reaction to the urban landscape and the lack of warmth she found there, she knitted a cozy to cover the metal door handle of her shop. She then knitted a sheath for the stop sign across the street. Passersby stopped and noticed. They took pictures. She was encouraged by the reaction and began covering items across the city.

Sayeg and a group of fellow knitters have since yarn bombed items across the world including parking meters in Brooklyn, a bus in Mexico, and a twenty-six foot statue of a soldier in Bali, neutering its violence, according to a 2010 article in The Guardian. In that same article, Sayeg says, “In this world of technology, over-development, fewer trees and more concrete, it is empowering to be able to beautify your environment.” This is a powerful statement in action. Sayeg, now in Austin, has spawned an international movement with yarn bombing groups popping up not only across America but also in Japan, Britain, Scandinavia, South Africa, and Australia.

Generally done in cover of darkness, some of the participants wear masks and relish the role of artistic vagrants. Like all unsanctioned street art, yarn bombing is illegal, and Sayeg’s original group of knitters in Houston crafted a terminology for their work based on the world of hip-hop, creating names for themselves such as Notorious N.I.T. and P-Knitty. The group as a whole was called Knitta Please or just Knitta. Further information on the history of the movement, Magda, and International Yarn Bombing can be found here.

I’m not really good at knitting, but I love to do it. I’ve crocheted for as long as I remember. My great-grandmother taught me when I was 4 or 5 to do a chain and basic single stitch. I remember getting a crocheted potholder every Christmas from Nanny with a five dollar bill folded up inside. While they were truly horrible potholders (acrylic yarn easily melts), I still have an entire collection along with the many scarves and pillows she made for me over the years. I keep them because they are touchstones of my time with her and all that she shared with me. They represent personal remembrances, a set of skills, and bright objects that are both functional and decorative.

I am also enamored with the idea of knitting or crocheting to affect cultural change. Yarn bombing definitely falls into the category of “craftivism,” a concept developed by Betsy Greer, whose website is a resource for many in the DIY and feminist craft movements. I love that those participating in yarn bombing, at least on one level, are taking action to reclaim their urban landscape, one that they see as cold and distant, by beautifying and changing it with a craft seen mostly as domestic, predominately functional, and in many circles–I would imagine especially in an urban context–irrelevant to modern society. Participants are reclaiming public spaces as home. Still, I have been contemplating what form such a movement would take in rural America and what the motivations and implications might be. 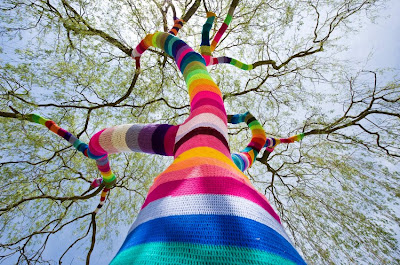 Photograph by DPA
First, I believe that many of the rural yarn bombing projects would stay around. Rather than temporary remnants of acts of activism, removed promptly by city employees tasked with keeping the city clean, I think rural examples would be adopted by many as decorative aspects of community life and remain part of objects such as mailboxes or garden swings where they were placed. I also believe that it might cause a resurgence in rural textile craft and appreciation of it. If we factor in, for example in my community, that there are many people, especially women, raising fiber animals and creating yarn that could be used, the implications become economic. These are just some of the possibilities that come to mind, but I would like to encourage any of you who knit or crochet to yarn bomb something, anything, in your rural communities on June 11. Of course, I believe we should locally adapt our methodology for such activities. If you’re going to yarn bomb something at someone’s home, you might ask first. I think, probably, public spaces are fair game. It doesn’t have to be large, could be something as simple as the first door handle that Magda did at her shop in Houston. Yarn bomb your local senior center, or better yet, get those folks involved!
In the spirit of engagement, I sent a note to Joann Matvichuk, organizer of International Yarn Bombing Day, asking if she had communicated with any groups or individuals planning on participating in the event from rural America. She was kind enough to pose the question on the IYBD facebook page and received dozens of responses of interest. Two responses in particular struck me as relevant as we think about what the implications might be for rural yarn bombing activities.

Corrine MacKrell: “I grew up rural. If I were going to yarn bomb at home, I would personalize it like a gift. A camo scarf on or around the garden gnome of a hunting family, flowers in her favorite color for the lady down the road, etc.”

Shane Raymond: In the country we have to be more discrete and organic with our tags. Since I know most of the people and their personalities I can tailor my tags better as well. Overall I would say it’s much more personal. Example, a colorful spider webs in the trees in deep state land. The only people that will see them are middle-aged hunters.

I encourage you to join the conversation on the International Yarn Bombing Day’s Facebook page. If you do a project, I’d love for you to share it with us. I’m interested in your photographs and in learning how the projects are perceived in your community. I’ll share my story too.
Tweet