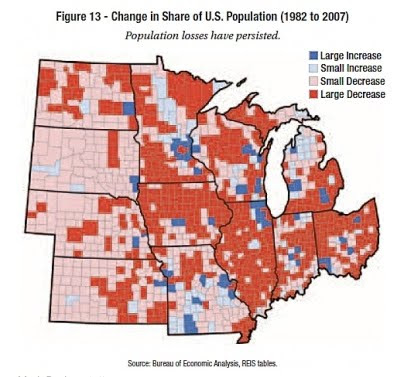 image from Mark Drabenstott, printed in The Daily Yonder
Here are some connections, commentaries and new leads that we’re following here at The Art Of The Rural:
— If our post on the fictitious town of Ogden Marsh, Iowa was of interest, then check out The Rural Blog and it’s new department covering Rural Representations and Reviews. The current editorial by John James Snidow considers the FX television show Justified and Appalachian myths:

About halfway through the first episode of FX’s new show Justified, a Confederate-flag-wearing, rocket-propelled-grenade-launching, minority-hating, ex-con, ex-miner, good-old-boy of a Kentuckian pulls out a Mason jar full of a clear liquid and smiles. And the audience knows without being told, just as you know reading this right now, that it’s not gin, it’s not vodka and no, that jar is definitely not water. It’s moonshine.

—  We have more to say about the moonshine, so stay tuned. Until then, did you know that the hipster community has turned to the white lightning? It’s an emerging industry, it has given birth to a new book on the subject. Again, more soon.

— Out of our Farmville Files, and out of the continuing questions of how members of the rural diaspora might return home, we would like to recommend this report by Mark Drabenstott: Past Silos and Smokestacks: A Rural Development Proposal. A selection, with excellent visual data (as seen above) can be found at The Daily Yonder.

Today, that industry is going away, and much of the rural Midwest’s economic vitality is going with it. The current recession is only accelerating a decline that has its roots in a rapidly globalizing market for industrial products. Traditional manufacturing jobs are leaving the rural Midwest. And so are many of its best-educated and most talented young people.

The rural Midwest could have an economic future as bright as its vibrant past. But it is basing its twenty-first-century future on a twentieth-century playbook. This is not a recipe for success. Towns and counties compete with neighboring towns and counties for jobs and investments. Industrial recruitment—“smokestack chasing”—is the norm. Economic development agencies spend millions on infrastructure and tax breaks to lure companies from afar instead of creating new jobs at home. Boosters sell the rural Midwest as a cheap place to make things, ignoring the region’s many other economic assets—its natural resources, its hard-working people, its central location, its schools and universities, and its scientific base, among others —that could all be leveraged into a competitive new economy.

–Hal Cannon and Taki Telonidis of The Western Folklife Center are blogging about their project “In the Footsteps of John Lomax:”

The Western Folklife Center has been asked to produce a story for National Public Radio on the folk music collecting of John Lomax. This coincides with the 100th anniversary of the publishing of his first collection, Cowboy Songs and Other Frontier Ballads, in November of 1910. We are working with a New York folklife organization called City Lore and hope to produce other stories on the journeys of early folklorists to discover the soul of America through its folklore. On this week-long journey through Texas and Louisiana, we go to the place Lomax grew up and saw, first-hand, the cattle drives after the Civil War. We visit the Elephant Saloon at the Stockyards in Fort Worth where he collected cowboy songs and where Don Edwards sang those same old songs in the 1970s. As we journey along the same paths Lomax took we contrast the world he lived in with that of contemporary America.

— Jen Gilomen, one of the filmmakers behind Deep Down, also made a very fine film worth checking out: Delta Rising. Here’s the trailer: