Midwest Realism in the Contemporary Novel

Perhaps we’re witnessing a shift back to the region’s realist origins. More likely, the Midwest is blooming into a wide proliferation of literary style.

The consistently excellent N+1 recently published a wonderful piece by Nicholas Dames. In “The Theory Generation,” Dames paints the generational portrait examined by a string of some of today’s most popular American novelists, undergraduate English majors in the heyday of academic literary theory now attempting to engage its ambivalent legacy. About half of the novelists cited are New Yorkers; more are native or transplanted Midwesterners (often from scholarly families, interestingly).

Jeffrey Eugenides cites the influence of his hometown Detroit in his life and his writing, the setting for his award-winning Middlesex. Cal, the novel’s protagonist, attempts to come to terms with his family’s conflicted Greek-American identity in Detroit and eventually escapes to San Francisco to come to terms with his own intersex identity. The novel received praise for its lucid engagement of the American Dream, an idea that gained mythic stature with Midwestern Gilded Age figures like Henry Ford, John D. Rockefeller, and Andrew Carnegie and one whose decline is especially vivid in Midwestern rust belts like Detroit. Both haunted and inspired by his city, Eugenides commented in a BOMB interview with Jonathan Safran Foer “I think most of the major elements of American history are exemplified in Detroit, from the triumph of the automobile and the assembly line to the blight of racism, not to mention the music, Motown, the MC5, house, techno.”

St. Louis’ own Jonathan Franzen (with a more ambivalent relation to his hometown) semi-autobiographically tells of a suburban Midwestern family attempting to navigate changing times in his renowned The Corrections.

A novelist not mentioned by the article who could fit the demographic of theory-heavy realists is David Foster Wallace. Though born in New York and a professor in California, Wallace grew up between Champaign and Urbana, Illinois as his father taught within the state’s flagship university.

Ben Lerner, born and raised in Topeka, Kansas, sets his Leaving the Atocha Station as a sort-of reverse of Eugenides’ abandonment of Detroit. The protagonist Adam, a slacker poet and escapee Midwesterner on fellowship in Madrid, “invents fictional alibis for others—such as the ‘fascism’ of his kind, liberal Midwestern father. ” Free in Madrid, he remains fixated on familial roots. 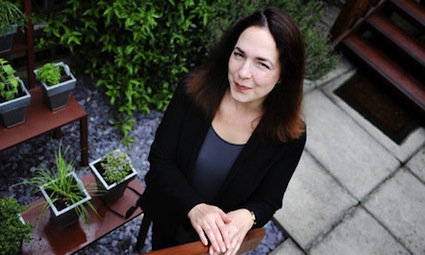 Lorrie Moore wasn’t born in the Midwest, but teaches here and sets her novels in the region. What’s more, Dames latches on to such a setting by using “Midwest” as a worthwhile description of the realist style that contrasts with the metropolitan university stylings of Theory:

Take, for instance, the protagonist of Lorrie Moore’s A Gate at the Stairs, a young woman named Tassie raised in rural Wisconsin, who describes the shock of her first term at her state university:

The deadpan Midwestern humor, so pointedly stark in its syntax, brilliantly evokes the moment of initiation into Theory.

With an American populace marked by quick and constant geographic flux from education and career-pursuits—well-exemplified by these novelists—it is remarkable that the Midwest still holds such adjectival power in first-rate literary criticism. This small coterie of realist, theory-drenched novelists may have transferred their geography to their style, osmosis-like. Others may argue Dames relies on hackneyed stereotypes of the “prosaic Midwest” when the region has sprouted its fair share of magical realism too.

Richard C Longworth, Senior Fellow at The Chicago Council on Global Affairs and author of Caught in the Middle: America’s Heartland in the Age of Globalism (an excellent work featured on my bibliography) summarizes on his blog The Midwesterner: Blogging the Global Midwest:

In earlier days, much Midwestern literature was super-realistic: the work of Theodore Dreiser and James T. Farrell come to mind, not to mention the wonderful work of black Midwestern authors such as Richard Wright and Lorraine Hansberry. But later writing reveals an urge to the bizarre, a sort of magic realism absent from the epics of the South or the hard-boiled policiers of the West. Keillor uses this. So does the baseball writing of W.P. Kinsella, such as Shoeless Joe (the inspiration for Field of Dreams) and The Iowa Baseball Confederacy. It’s no accident that Ray Bradbury’s Midwestern youth led to so much his work.

Perhaps we’re witnessing a shift back to the region’s realist origins. Perhaps, more likely, the Midwest is blooming into a wide proliferation of literary style just as in other regions, where Ray Bradbury’s spaceships and Lief Enger’s miracles can exist alongside the different realisms of Franzen et al. Regardless of style, the Midwest still serves as ambivalent setting or temporary home for some of the nation’s finest writers. Not quite dead yet; perhaps alive and well.