Detroit, Its Future and Farming 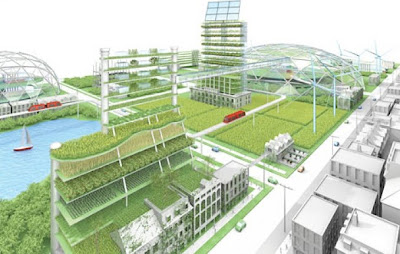 illustration of John Nantz’s project by Byran Christie
By Ian Halbert
My cousins all live outside of Detroit and it is not uncommon to hear from them horror stories of just how devastated and blighted the city has become. Surely, we are all familiar with Detroit’s economic problems and urban decay – it has been the butt of jokes for generations and after the onslaught of this most recent recession, the images and stories of just how it is in one of America’s former industrial powerhouses have been nothing short of astonishing. With an unemployment rate in Michigan at about 15% – 5% above the national average – and a housing market that has tanked, the area has become victim to all sorts of real estate speculation, as some homes cost as low as $5000. This blog seems to be a get-rich-quick-at-Detroit’s-expense scheme, while other – one would hope more responsible – outlets have pushed the same idea.

The end result is that a great deal of Detroit land is embarrassingly cheap and thus easily repurposed. And this is potentially good news. As such, some bright lights have advocated remaking the city entire, in addition to rethinking the design and function of cities in general. Micro loans have become popular in the area and futurists like Jerry Paffendorf have applied such financial tools to more grand projects like “Loveland,” where anyone in the world can buy an inch of Detroit for a $1 with the aim of creating community owned and operated public spaces. (More on this not entirely comprehensible project here and here.)

But perhaps the most exciting idea has been the serious proposal of expanded and extensive urban farming. The idea is controversial, as it would require converting large amounts of public and private land (currently there is over 40 miles of vacant city land) being converted to essentially farmland, graded, raised and laid out almost in the manner of Macchu Picchu to accommodate the urban terrains.

John Nantz has the vision for such a project (see above), but the city and its constituents have been wary of putting so much public space in the hands of a single, corporate entity, rather than in the control of the community.

While it is dangerous to be overconfident in the hopes for these grand urban farming ventures (see tip 6) in the face of such economic odds, these projects and ideas could potentially change how we think about not only our urban landscapes, but also our rural ones. One need only consider the immediate paradox that as we continue to industrialize the countryside and its crops, the cities would have access to fresh, local produce. Perhaps, in some strange irony of historical significance, from the ashes of the heart of American industrialism will come a return to the farm and the land.