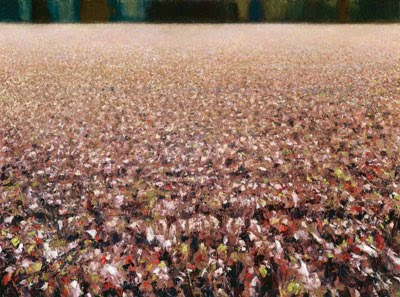 Gene Logsdon’s latest book, The Mother of All Arts: Agrarianism and the Creative Impulse, got me through the gap between this post and the last, when I was laid low by a nasty cold. Mr. Logsdon, alongside other established agrarians such as Wendell Berry and Wes Jackson, have set the table for younger generations. In that literal sense, they have provided the reading material to go along with the organic food resurgence; however, in the figurative, it’s unclear even from reading Mr. Logsdon’s excellent survey of the agrarians arts who (save a few names) is set to inherit this mantle.  In a larger sense, this is one of the central questions I’m exploring on this site, so there’s more thoughts on The Mother of All Arts forthcoming.
But Mr. Logsdon’s book is full of discoveries. Here’s an excerpt from his introduction to the work of Gary Ernest Smith:

Smith grew up on a farm, a ranch actually, near Baker, Oregon, and eventually embarked on a career as a painter working on a commission. According to his bio (I was unable to get an interview with him), he was successful but dissatisfied. He was tired of painting what other people wanted him to paint. He returned for a few months to his boyhood home to contemplate his future. Although he had always painted some farm and rural scenes, now, fired up by recollections of his youth, he decided to concentrate on those subjects. He moved with his wife and children in 1978 to rural Utah. “All artists look for subject matter that they can consider personal,” he was quoted as saying recently. “I guess for me, it was just looking out my window. I never needed anything else.”

In the 1990s, he became renowned for his paintings of vast open sweeps of farm fields. Critics, in high praise, said that he was lamenting the passing of the farm landscape. They labeled the paintings pictures of protest.

It is difficult for rural people to think of these paintings as a form of protest. There are still vast acreages of tilled land to be viewed even here in Ohio, which is more densely populated than the states farther west where Smith usually paints. In every direction in our neighborhood, for example, there is in the seemingly unlimited expanse of cultivated dirt a signature Smith painting in the making. Rural people consider such terrain to be commonplace. So why are paintings of it considered so unusual?

Gene Logsdon’s final question gets at the urban-rural question that always seems to be lurking around the corner from the rural-based arts that gain wider acceptance. We might visit his lengthy chapter on Andrew Wyeth as well, to see how, free from the rural artist’s studio, these works can become conflated (sometimes simultaneously) with protest, pastoralism and “outsider” romance.
To those ends, the web offers a lot of avenues for learning more about Gary Ernest Smith’s work.  An exhibition of his new work, High Horizons, opened today at The Overland Gallery. The Medicine Man Gallery also offers this illustrated article on the 2008 show, Rural Life – From The Ground Up, that documented man’s cultivation and manipulation of land in the rural West.
Tweet