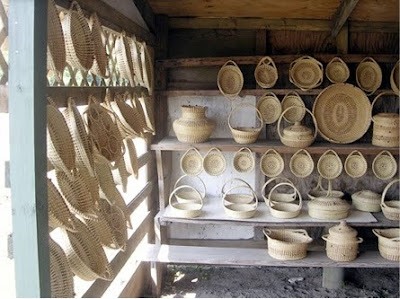 There’s a whole history behind these baskets, it’s not just a basket. You have this tradition that’s been handed down from generation to generation in their families, which goes back over three hundred years. So it’s more that just a basket. You have a whole culture, a whole family, a whole connection of Africa and South Carolina, a whole history behind it.

Last week we discussed the Black Banjo Gathering, and how those musicians were reclaiming the banjo as an African instrument while also celebrating how its role in American musics. The National Endowment for the Humanities, and their NEH On The Road program, are offering an exhibit that also celebrates a transatlantic cultural exchange: Grass Roots: African Origins of an American Art. The exhibit’s next stop is the National Museum of African Art in Washington, DC. Here’s an introduction:

Grass Roots: African Origins of an American Art traces the parallel histories of coiled basketry in Africa and America, and explores the contemporary evolution of an ancient craft in a global economy.
Featuring baskets from the lowcountry of South Carolina and Georgia, as well as from diverse regions of Africa including Senegal and South Africa, Grass Roots examines the origins of the African-American coiled basketry tradition on American shores, from the domestication of rice in Africa two millenia ago, through the Trans-Atlantic slave trade and the Carolina rice plantation, and then into the present day. Organized by the Museum for African Art in New York City and co-curated by Enid Schildkrout (Chief Curator, Museum for African Art) and Dale Rosengarten (Curator and Historian, College of Charleston), Grass Roots highlights the remarkable beauty of coiled basketry and shows how a utilitarian object can become both a masterwork of fine craft and a container of memory and collective history.

Last week we also discussed The Mid-American Arts Alliance and their collaboration with Dave Loewenstein on The Mural Project, and lo and behold, they’ve also worked with the NEH On The Road program to produce the two videos below. In the first, Dr. Rosengarten offers context for the art and a narrative on the project’s development; in the second clip, Nakia Wigfall discusses her personal connection to basket arts. She’s a fifth-generation basket-maker from Mt. Pleasant, South Carolina, and also the director of the Sweetgrass Cultural Arts Preservation Society.