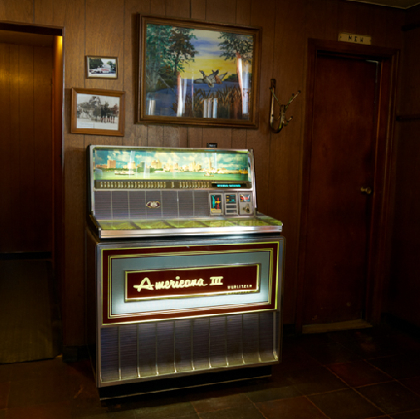 Selection from a photograph of Sesslers in Meeme, Wisconsin; Carl Corey

Growing up in Chicago, we’d come to Wisconsin to visit people, and we’d always go to a tavern. I was ten or eleven years old, I’d play pinball, and my folks might have one or two drinks the whole night, but they’d sit there and talk with everybody from the area. It’s something that’s been embedded in my mind.     – Carl Corey
I’ve been thinking about Wisconsin a lot lately, after visiting David Lundahl and New Light Studios and reconnecting with a landscape that was a home-away-from-home for a many years. One of the most distinctive elements of Wisconsin culture, and one that meets and exceeds its cultural cliche, is The Wisconsin Tavern. Unlike bars across many regions of the country, they are inter-generational community meeting spots–and not just places to watch sports or flirt over the pounding bass of pop music. Having also lived in Ireland for a while, I can say that Wisconsin bar culture comes the closest to the communal feel of the Irish pub–these are places you can walk in and hear the news, a story, or a joke. Or just sit there.
Wisconsin is a unique state, in some respects like parts of New England, in that even its rural areas feel populated in ways that defy their actual population statistics–and the central role of the tavern helps to create this larger-than-demographics sense of community.
Thus, I was excited to read news of the publication of Tavern League: Portraits of Wisconsin Bars by acclaimed photographer Carl Corey. His eye for place and detail is perfectly matched to these locales, and his personal connection to these bars allow a warmth to these photographs. In lesser hands, these images would have been clinical, psuedo-social commentary, but here we get the sense that an artist from the community has stepped forward to transmute their spaces into visual art. 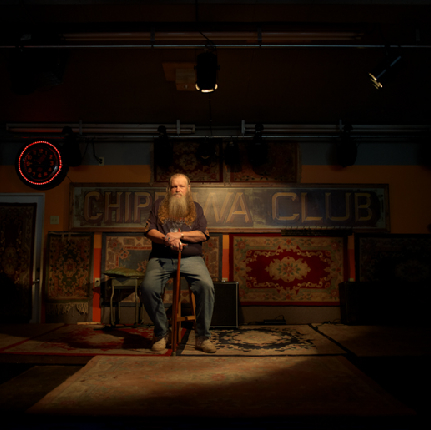 Selection from Marty, Chippewa Club, Durand
I encourage folks to travel to Mr. Corey’s photography site to see more of the stunning images in much larger scale, and with much higher resolution. Below I’ll include a clip from the excellent In Wisconsin PBS Program about Tavern League, as well as the publisher’s introduction to this book of photographs. Enjoy: 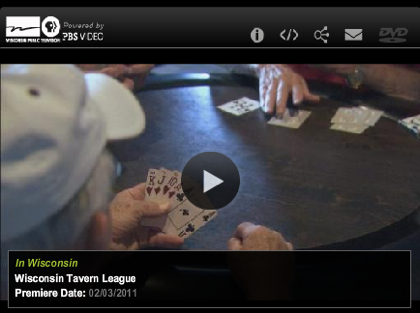 With a view both familiar and undeniably unique, perceptibly eerie but somehow warmly inviting, photographer Carl Corey’s pictures in Tavern League: Portraits of Wisconsin Bars capture the Wisconsin public house as it is today. The 60 pictures collected here are awash with a sense of place — the lingering tang of cigarette smoke, the feel of a gritty floor as a bar stool is pushed back, the ease of sinking into a dimly lit womb of good company and cold beer. Supernaturally vivid colors intertwine with distinctly average vignettes to reveal the magical, and fleeting, quality of these singular places and the people who love them.

A stunningly evocative collection of documentary pictures, Tavern League serves as a sociological snapshot. Our bars are unique micro-communities offering patrons a sense of belonging; many are the only public gathering place in the rural communities they serve. These simple taverns provide the valuable opportunity for face to face conversation and camaraderie, particularly as people become more physically isolated through the accelerated use of social networking, mobile texting, gaming, and the rapid-fire of email. The Wisconsin tavern presented here is an important segment of the Wisconsin community — one whose evolution, and even continued existence, stands in question in a young twenty-first century.

Carl Corey has been interested in photography since he was a child growing up in Chicago. He has worked as an advertising still photographer and director and cameraman for advertising projects in Chicago and Los Angeles. He retired from the advertising business after twenty-five years and moved to Wisconsin to focus on documentary photography. He lives in Hudson.

Carl Corey’s work is exhibited in galleries and museums worldwide, as well as in numerous private and public collections. Corey has won more than 100 photography awards from such groups and publications as the New York Art Directors Club, Communication Arts, Bessies, Addys, and Gold Lions.