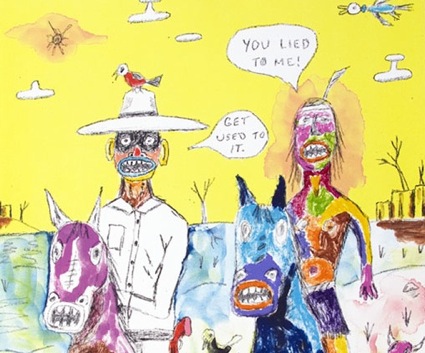 Selection from untitled (Untruthful Series), 2011; Bockley Gallery
The Bockley Gallery in Minneapolis is currently featuring Works on Paper, an exhibit of new prints and paintings by Jim Denomie, a Minnesota-based artist and member of the Lac Courte Oreilles Band of Ojibwe.
Mr. Denomie’s work is striking and unforgettable – these paintings, and the many others archived on his site, present a dynamic use of color and a compositional depth that reward repeated viewings.  These conscious decisions with process and presentation invest these pieces with an emotional weight that runs parallel, and sometimes counter-current, to a playful, clear-eyed commentary on American history and culture. We discover in this work a new vision of our country’s place and its history: part indigenous iconography, part surrealism, part American vernacular. 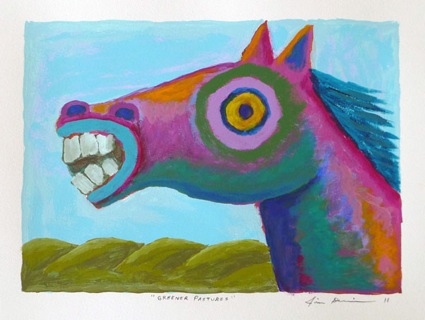 The Lone Ranger and Tonto appear in one series, while a couple canoes alongside a grinning duck in another series. The exhibit includes a number of prints, both etchings and monoprints, as well as paintings created in acrylic on paper that introduce new Denomie characters in colorful portraits. These works on paper, mostly created since May of 2011, suggest just some of Denomie’s recent creative outpour. During a two-week residency in Oregon, Denomie created a body of over 72 new monotypes and monoprints.  He has since reworked dozens of those prints in oil stick, which results in dramatic texture and wonderful clarity of color.   For Denomie the process has been a distinct change and he delights in the radical shift from original print to reworked image that allows what he calls “the unexpected” and that now influences his painting as well. Of his print-making process, Denomie has said: “… laying portraits over the tops of these random patterns would feed into the final project, where you’d get this unexpected juxtaposition of colors that wouldn’t have come if I’d have started with a blank palette.”
The exhibition presents dozens of images unframed in order to reveal the intimate nature of works on paper and to bring into focus how the artist’s materials influence his creative outcome.  The result of this presentation of unframed works creates a feel as informal and as deeply informative as a studio visit.  The installation allows us a close-up view as Denomie encounters “the unexpected” within his own new work. 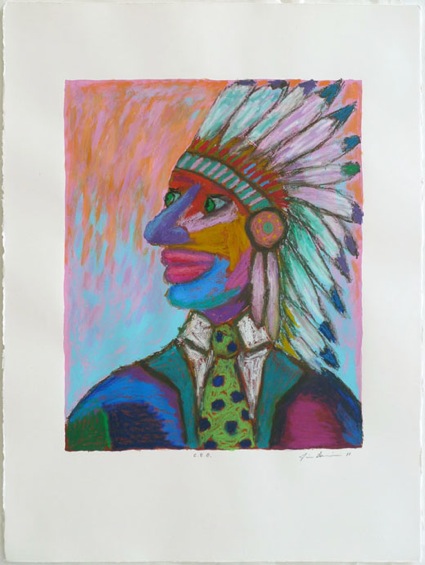 C.E.O; Bockley Gallery
The pieces on view at the Bockley Gallery offer a sharp summation of Mr. Denomie’s work over the last few years, when an attention to process and the “reworked image” led the artist to commit to painting a new piece each day for an entire year. In “Jim Denomie: Finding the New Country in the Old,” mnartists.org’s Lightsey Darst interviews the artist on this process and also offers an insightful reading of what’s at stake in the series — and in Mr. Denomie’s aesthetic. Here’s a selection:

After painting a face, he might work on other projects, paint another face, or simply go to bed, but every day he makes himself paint at least one of these small canvases. He does not try to create a perfect work of art; instead he lets himself play with the paint. He uses the colors already on the palette or adds new ones based on his mood. Daily surges of emotion affect the work, sometimes directly—one day’s face is grinning, another sour, one yelling (after the Red Lake shooting)—but more often indirectly: the faces evolve their own personalities, their own neutral but suggestive expressions, so that looking at many of the faces at once is like staring into a crowd of strangers. Denomie’s not dogmatic about what goes into a face; some of the more abstract faces lack eyes and might not be recognizable as faces but for their company. When the face is done, Denomie signs the back and names it, if it happens to have reminded him of anyone.

Why is Denomie doing this daily painting project? Speaking on his cell phone from his full-time construction job, Denomie tells me he began the project because he found painting too often pushed to the side. Between work, family, and the rest of a normal life, he wasn’t getting time to go to his studio every day; when he did paint, sometimes after a week away, he felt “like a foreigner” in his own work. He was getting out of the habit and wanted back in. Inspired by other artists, Denomie bought supplies, told friends about his idea so he wouldn’t back down, and began.

To hear Mr. Denomie in his own words, folks can give a listen to this radio interview conducted by mnartists.org’s Marya Morstad, and view this talk by Mr. Denomie on his “Non-Negotiable” and what it means to be an artist and a Native American: