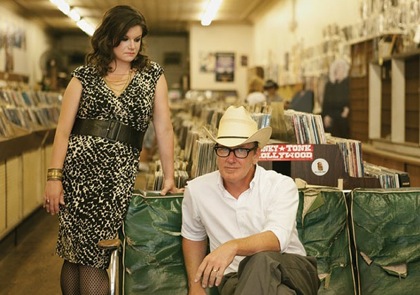 Cortney Tidwell and Kurt Wagner; Eli McFadden
I’m remiss for not sharing this earlier, but there’s something about the prospect of a summer Friday evening that may make this the perfect moment to encounter Kort, the musical partnership between two extraordinarily gifted Nashville musicians: Cortney Tidwell and Kurt Wagner (Lambchop). Here’s Stephen M. Deusner introducing their recent Invariable Heartache record in Pitchfork:

Chart Records is a bit of obscure Nashville history, notorious to those who dig through the crates at Grimey’s [a famous record store in Nashville] but largely unregarded by those outside the city limits. Founded by Gary Walker in 1962 and purchased by local businessman Slim Williamson in 1964, it was the temporary home of established acts like Junior Samples and Red Sovine, but the emphasis was squarely on young talent with crossover potential, including its biggest success story, Lynn Anderson. Most of its roster might not ring a bell these days, mush less a cash register, but Chart was certainly a label of its moment, when country was entertaining the notion of pop.

One Chart artist, a Miss Nashville runner-up named Connie Eaton, married Williamson’s son, and they had a daughter named Cortney (now Tidwell), who grew up to become a country singer herself. Nearly half a century after Chart’s founding, she is paying tribute to the family business with an album of primarily Chart covers, most of them duets with Lambchop frontman Kurt Wagner. Both represent the seedy Nashville underbelly of local artists actually paying heed to local history, and fittingly, the idea for this collaboration originated on stage at the Basement, where the two sang an impromptu Don Williams cover together.

Included below is an excellent short documentary that expands upon how Ms. Tidwell and Mr. Wagner came to bring these songs back to life. Also: the official video for “Pickin’ Wild Mountain Berries.” Folks can pick up the CD or download here; also William Tyler (an amazing guitarist in his own right, and subject of a future article) has just released Invariable Heartache on vinyl through his Sebastian Speaks label. The LP can be purchased in-store at Grimey’s or online at Other Music.

For some comparison, here’s the earlier version of “Pickin’ Wild Mountain Berries,” sung by two of the luminaries of an earlier Nashville moment: Conway Twitty and Loretta Lynn: