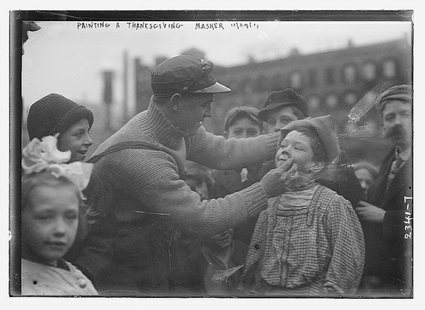 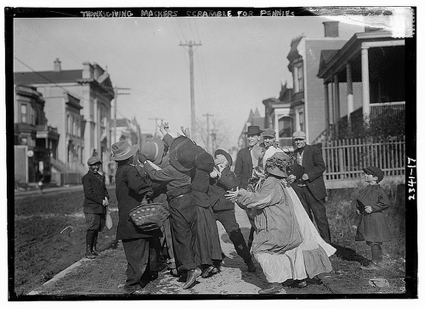 Newspapers advertised ‘Thanksgiving masks’ and ‘lithographed character masks’ for the tots. These featureless disguises were often sold in candy stores alongside holiday related treats like spiced jelly gums, opera drops, crystallized ginger and tinted hard candies.
“This play of masking is deeply rooted in the New York child,” said Appleton’s Magazine in 1909. “All toy shops carry a line of hideous and terrifying false faces or ‘dough faces’ as they are termed on the East Side.”

Boys frequently wore girls clothing on this occasion, “tog[ging] themselves out in worn-out finery of their sisters” and spending their afternoon “gamboling in awkward mimicry of their sisters to the casual street piano.”

The New York Times in 1899 found the streets filled with costumed tricksters that Thanksgiving. “There were Fausts, Filipinos, Mephistos, Boers, Uncle Sams, John Boers, Harlequins, bandits, sailors… In poorer quarters a smear of burned cork and a dab of vermilion sufficed for babbling celebrants.” 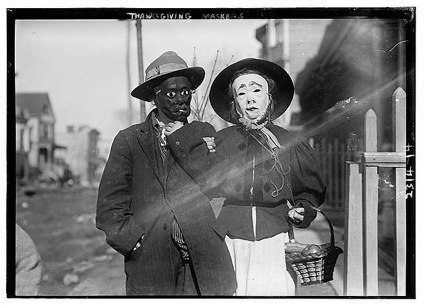 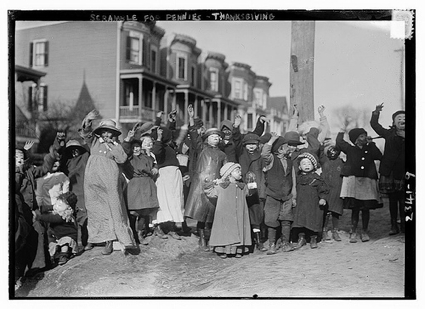 Scramble For Pennies – Thanksgiving; LOC flickr photostream
It’s worth considering the reaction to this element of urban community in the mainstream press and city officials of that era – in an excerpt from this article posted in the comments section to the Library of Congress flickr photostream:

“Progressive era reformers regarded child begging on Thanksgiving as immoral and thought children who engaged in it should be arrested. Why were parents not able to control their offspring? the New York Times in 1903 wanted to know. The newspaper castigated parents who allowed children to demand treats or money as indecent. The police tried to enforce a ban against begging. In response to complaints from the public, the clergy, school superintendents, and classroom teachers issued warnings. The New York Times in November of 1930 worried that demanding coins could teach children to become professional beggars and blackmailers and that children were annoying the public. Begging, decided the paper, was a “malicious influence on the morals of children of the city.” Boys’ clubs and other child welfare agencies organized parades and costume contests as alternative activities. As a result of these efforts, child begging on Thanksgiving finally disappeared by the 1940s.”

On this Black Friday, these gatherings and scramblings of Maskers makes a complicated parallel with the Americans congregating inside and outside of retail outlets today. Both the media forces behind the Occupy movement, on one side, and the conservative press, on the other, provide critical readings – yet each reading of these swarms of shoppers neglect the fact that many folks – perhaps out of work, burdened with debt – see these Black Friday deals as their best chance to afford these consumer goods. Certainly, this cultural phenomenon should be examined, but we should also recognize the force of necessity behind those lines of midnight shoppers.
Tweet