Misrepresenting The Bravery of Frank McGee 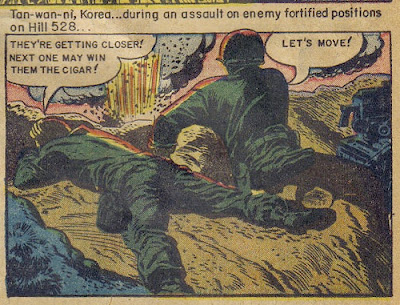 selection from Heroic Comics #58; Comic Book Resources
Today I’d like to share the first of two Memorial Day posts, both of which attempt to tell of the sacrifices that rural Americans have made as part of our country’s armed forces. While tomorrow’s selection will highlight efforts to document the stories of these veterans, today’s piece stands as an example of how the story gets told wrong.
I first heard of Frank McGee through family members from my home region in the Ohio Valley. Mr. McGee’s bravery in the Korean War made the pages of a popular comic book at the time, Heroic Comics (1953). Here’s Michael San Giacomo offering the context for the illustrations from Comic Book Resources:

McGee’s real life adventures were perhaps as dramatic as those of the comic book heroe of his day. He was a 22-year-old black steelworker who had seen little of the world beyond his Ohio-West Virginia roots before he was tossed into an international conflict a half-world away. On June 16, 1952, in a battle near Tang-Wan-Ni, Korea, McGee took command of his platoon after his squad leader was wounded, and his men attacked the enemy’s fortified position on Hill 528.Of course, McGee was a corporal and not in line to take the lead, but the second-in-command froze when enemy fire exploded all around them. McGee recalls his superior “just standing there,” unmoving. McGee realized it was up to him to take over. He fired at machine gun nests and held off the enemy while his platoon continued fighting up the hill. At one point, McGee was injured, but there was no one to take over for him. He ignored his wounds and continued fighting until orders came to retreat.

McGee remembers watching the mortar shell land in front of him, as if happening in slow motion. “I saw it coming at me, it looked like a baseball,” he said. “It landed a foot in front of me and exploded, I got it in the chin and side of head.”

As Mr. Giacomo reports in his excellent article, Heroic Comics did an admirable job of narrating the facts of this battle, with one major exception: Frank McGee is an African-American, yet the comic book portrayed him as a white soldier.While, by our modern standards, this is an unforgivable omission, Mr. Giacomo tells us this was a common practice in comics of the time:

Black people were difficult to find in American comics of the 1940s and 1950s. When they did appear, African-Americans were often drawn as caricatures and played for comic relief, like The Spirit’s occasional sidekick, Ebony White, or the member of the superhero group “Young Allies,” Whitewash Jones. The early Tarzan comics were also exceptions, as black characters were often seen as tribesman in his jungle adventures. There was also a single issue of 1947’s “All Negro Comics,” which featured strong stories of black men and women, written and drawn by black artists.

At the risk of merely excerpting all of Mr. Giacomo’s piece, I recommend that folks give his full article a perusal–because what he documents is not only a problem in how the African-American experience was misrepresented in comic books, but also a problem with how Medals of Honor have been distributed, historically-speaking, in our country: no African-American had received such a distinction until the end of the Korean War.  The larger, more systemic, injustice here is that Frank McGee did not receive a Medal of Honor for his actions that day at Tang-Wan-Ni. Though his white commanding officer promised to advocate on his behalf, Mr. McGee has yet to receive the honor. Had he been recognized in due time for his bravery, he would have been the first African-American in history to have been awarded the Medal of Honor.This is an omission which slights not only Mr. McGee but those generations of African-American soldiers that preceded him; I am particularly proud of this man and our home region, which housed many stops on the Underground Railroad and which, although roughly at first, was racially-integrated long before most other areas of America.

One of the folks working to secure his Medal of Honor, Victoria Seacrest, has articulated this best, when she said that Mr. McGee “comes from a long line of freedom fighters, all the way back eight generations to an ancestor who was the son of an English woman and a black man who fought in the Revolutionary War.”

We’ll be following the story of Frank McGee and the efforts to grant him the Medal of Honor he rightfully deserves.

Related Articles:
Where Soldiers Come From