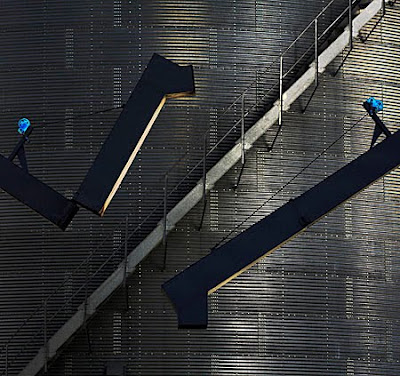 Apparatus by Bradford Kissell
One of our earliest posts related our discovery of MN Artists, an organization with a mission “to improve the lives of Minnesota artists and provide access to and engagement with Minnesota’s arts culture.” Their site is a model that other states would be wise to follow: it offers, in one place, a rich and various selection. While artists can display and sell their work, MN Artists also offers a good deal of interviews, features and reviews–in short, it’s the portal through which anyone can learn more about the Minnesota arts.
As our readership has expanded since our earliest months online, we’d like to re-present this site and offer a small selection of the work to be found therein. When the artists have offered statements to accompany these pieces, we’ll include them below. Enjoy: 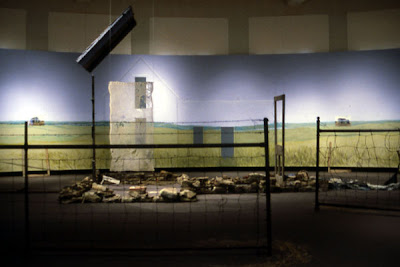 from The Disappearing Homestead Project, Jeffrey Morrison
Futures of our rural landscape continue to be the focus of my work.

As more and more rural acres are appropriated for urban development and city expansion the disappearance of family farms continues to grow at alarming rates—current annual rate average of prime agricultural land converted to developed uses is 2,416,200 acres. [

As reported by National Resources Inventory Census of Agriculture]

Vested in bring agricultural-related issues into the public eye to attract audiences as well as raise awareness, I continue to explore our relationship to the land and to the pioneering spirit our ancestors brought to the Midwest.

Overseeing The Crops, 54″ x 19″ Oil Paint on Canvas, Jill Peterson
“Overseeing the Crops was inspired by black and white photographs that I found in my grandmother’s old albums. Besides seeing family members, some I had never met before, it gave me a chance to glimpse at brief moments of history that made up generations of a life in rural North Dakota. As technology progressed, the tedious work with horses was replaced with the invention of the combine, which led to a more productive way of working the land. It also allowed oneself to stand back and admire the vast golden fields of wheat, a collaborative effort that has been built upon by many generations of farmers.” 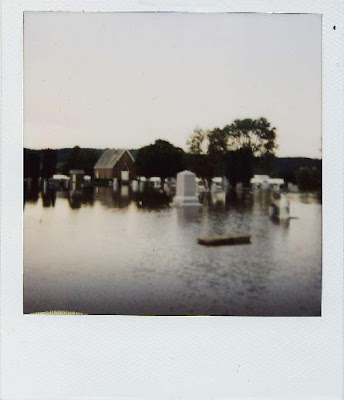 Flood, from a Polaroid series, Jaid Jacobson
“This is a collection of polaroids taken in the summer of 2008 when Spring Green, WI was flooded out.” 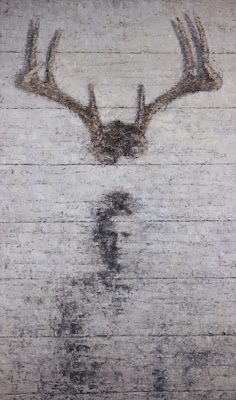 Maturity by Sarah Hultin
“The reality of abandoned houses in rural areas is apparent but the past easily forgotten. The past cannot be denied because it is incapable of existing in lasting structures. Memories may not be visible but linger in the forms that still exist. The series of work titled “Rural Inhabitants” reawakens memories prominent in such structures. The walls of the abandoned house conceal the past. Beyond the structures, which have proved impermanent, we cannot distinguish ourselves from those of our ancestors. In effort to describe the past, I have introduced the human figure. The figure represents a memory while the structure itself is associated with the present reality. Inspired by the tendency to bury the past away in structures incapable of existing forever, the memories of the past too become a form, tangible and capable of decay.” 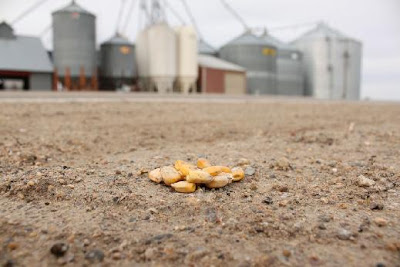 Corn Mill, Leanna Becker
“In these times, farmers are overlooked and taken for granted, and rural family farms are disappearing more each day. The hog market has crashed in the last two years causing a crisis for farmers, especially in the Midwest.  People are constantly laid off and looking for jobs, but farmers have a steady job from dawn until dusk everyday. Our farm could not survive successfully without the family members. Everyone plays an important part on the farm, from working the fields and giving shots, to filing the papers and reviewing the payroll. This is a job that takes a large amount of labor, but is paid a low amount of income. However, this is still very rewarding no matter what the circumstances.
I have been working on our family farm since I was as small as a pig. When you are born into a farm family, you are immediately taught the importance of family and work ethic. Even though we have to work together day in and day out, we remain a really close-knit family. Most of our summer outings include our family, our aunt and uncle’s family, and my grandparents. My dad loves to quote the saying, ‘Friends come and go, but family is forever.'”
Tweet