By Jennifer Joy Jameson, Notes From The Field series Editor

The interesting part about any ethnographic study is putting the pieces together, stepping in and out of a culture or history that may or may not be your own in order to share it with others.

One evening late in March 2010, my friend Joe called. He told me that his friend Chris had been on a dumpster job that day, helping clean out the house of a recently deceased hoarder. The hoarder had had some 78-rpm records, and Chris had brought a few home. Joe was there for dinner and he put him on the phone. “What kind of records?” I asked. “Old-timey stuff,” Chris said.

Just hours before everything at the Louisville home of the late Don Wahle was to be sent off to the landfills, Salsburg arrived to find boxes upon boxes of dirtied and molding 78s of both rare and popular country and hillbilly recordings collected by Wahle since the 1950s. Salsburg’s efforts to uncover these musical artifacts, working alongside the clean-up crew, became his own sort of archaeological dig as he found himself gathering and assembling clues of Wahle’s own aesthetics, interests, and desires.In the liner notes, Salsburg admits his prior lamentations of a bygone era of record collecting, or “The Great Southern Record Canvass” as he calls it—something Mr. Wahle surely thought about, too. A longtime Louisvillian himself, Salsburg told me that the sheer serendipity of coming across Wahle’s fragile collection, in his own city no less, served as a reminder that golden eras are, in fact, fluid in time and space.After the discovery, Salsburg and friends started the work of gathering Wahle’s history from whatever scribbled correspondences and musical want-lists were found. He and others looked for next-of-kin, but no one stepped forward. Salsburg states, “We don’t know what he did for a living, what he looked like, or virtually any other biographical details apart from his record collecting.” 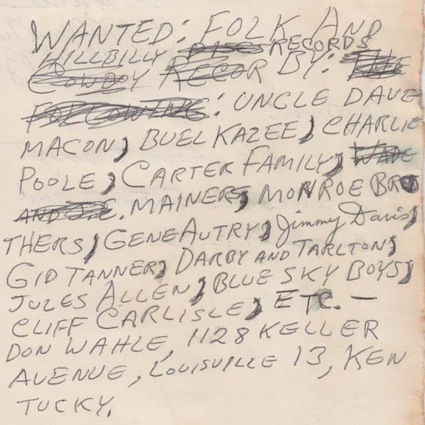 But what’s more interesting is how the story of Don Wahle’s music collection leads to other narratives of life lived; through hard times, through good times, and through those very American ideas of end times.

While utilizing and acknowledging the curatorial model set forth by Harry Smith’s Anthology of American Folk Music (famously organized into “ballads,” “social music,” and “songs”), Salsburg and his contributors steer clear of the legacy of mystifying the American experience as gathered in song. Rather, the set’s conceptual framework is “inspired by the life-cycles of the predominantly rural Americans that made this music.” Salsburg starts the process of interpreting these multiple histories through his careful and researched annotation. Thoughtful essays in response to the music and to Wahle (but mostly to the music) written by Editor of The Old-Time Herald, Sarah Bryan, music journalist Amanda Petrusich, and Southern writer John Jeremiah Sullivan, continue that work. The essays and annotation strive not to speak for the music, but to wonder about it. For the “Play Hard” disc, Sarah Bryan asks:

What about Mr. Wahle? What was his kind of fun? He was a collector, so we can assume that something about the process of seeking and acquiring gave him pleasure. […] Maybe the jollity of these records was for Don Wahle something like the moonshine skits were for listeners during Prohibition: a way to acknowledge, if not quench, a thirst for something just out of reach.

The songs tell enough of a story on their own—like my favorite two-part tune from the “Work Hard” disc, “Flat Wheel Train Blues,” recorded in Georgia in 1930 by Red Gay and Jack Wellman. Parts 1 and 2 set the scene for everyday life on the locomotive yard. Fiddles move the steam engine forward, producing a sweet rhythm while the singer hums verbal work-song encouragements that allude to the honest memory of a railroad man.

We can only know so much about Don Wahle. We don’t know why he decided to collect cowboy and hillbilly records while everyone else was buying up the glamorous sounds of big band and hot jazz; or why he furiously circulated requests for certain records but didn’t seem to ensure their care and sustainability; or why it is that, even as a member of a robust and communicative culture of record collectors, we still have so many questions about Wahle. What we do know is that Wahle was part of a grand tradition of giving new life to old stories. John Jeremiah Sullivan, in his notes for “Pray Hard,” writes:

The old songs are so easily lost. […] If this gathering of them is all that remains of Don Wahle, let nobody say he lived for nothing.

Work Hard, Play Hard, Pray Hard: Hard Time, Good Time & End Time Music, 1923-1936 is available in three-disc sets on CD or LP from Tompkins Square or from your local independent record store. Thirty-five of the 42 sides are from Don Wahle’s collection (19 of which are un-reissued), and the remaining sides are from the collections of Joe Bussard, Frank Mare, and Christopher King.

Folks can read more about salvaging the Wahle collection on Nathan Salsburg’s Root Hog or Die website. We also recommend perusing the Tompkins Square catalog. This label is bringing archival and contemporary music together in exciting ways; their book/cd set He is My Story: The Sanctified Soul of Arizona Dranes was recently nominated for a Grammy in the Best Historical Album category.