On View: Laura McPhee: River of No Return

In her large-scale photographs—each measuring six by eight feet—Laura McPhee says “you feel the past and the present in one place.”

via The Kemper Museum of Contemporary Art, Kansas City:

In her large-scale photographs—each measuring six by eight feet—Laura McPhee says “you feel the past and the present in one place.” The exhibition Laura McPhee: River of No Return looks at the landscape and culture of the American West with a special focus on the Sawtooth Valley in central Idaho, a desolate part of the United States. The exhibition is on view May 17–September 22, 2013, at the Kemper Museum of Contemporary Art in Kansas City, Missouri. It opens with a free, public reception 5:30–7:30 p.m., Friday, May 17. Admission is free.

Photographer Laura McPhee began this body of work in 2003 as the first resident artist supported by the Alturas Foundation. By 2008 she had traveled to the Sawtooth Valley nine times, photographing the ranches, creeks, mountain ranges, and people. The exhibition is comprised of 27 photographs of the Sawtooth Valley, pictured at various times throughout the year. These monumental photographs balance the majesty of mountains and terrain of the American West with the everyday life of the Valley’s inhabitants and visitors. In one photograph, a car leaves a dust trail across the expansive landscape. In another, a woman in a flowing gown tracks radio-collared wolves.

McPhee’s works also raise issues about the impact of humans on the land and the tensions among ranchers, hunters, environmentalists, and recreationists. She captures images of the region’s beauty that, in some ways, is a victim to its “endless” resources. Mining, land development, and other uses have left imprints—some permanent—on the landscape of the Sawtooth Valley. Her lush images—made with a large-format camera and printed using traditional photographic methods—envelope and engage viewers in their sheer scale and poetic intimacy. McPhee’s choice of camera, photographic paper, and method of printing reflect a bygone technology, now replaced with digital cameras and printers.

From previous previous Art of the Rural coverage of River of No Return: 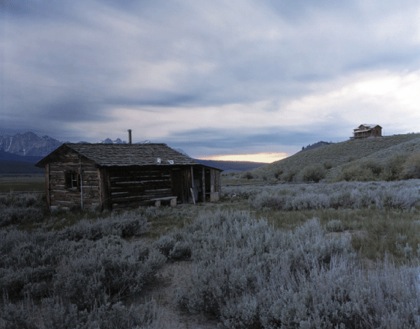 Laura McPhee made these remarkable photographs over several years on successive visits to the Sawtooth Valley [in central Idaho]. River of No Return is organized like a long poem or a piece of music…a stunning look at an actual place, a meditation on rivers, nature, history, the history of landscape photography, of the American West and the idea of the American West. And—while I’m piling theme on theme—the nature of fact and the nature of myth, and how we hold the world in our hands.

That’s Pulitzer Prize-winning poet Robert Haas writing on the work of Laura McPhee, an artist raised in rural New Jersey and whose recent work has chosen cultural environments as various as New York City and Kolkata, India. Many thanks to Texas-based artist Chris Sauter who recently shared news of her River Of No Return series.

Yale University Press published a selection of these photographs in 2008, with a forward by Mr. Haas, an essay by Joanne Lukitsh, and an interview between the artist and Dabney Hailey. As the Press elaborates below, these photographs consider the long history of the West’s place as symbol and aspirational landscape within the American consciousness, while also cultivating an honest and engaged connection with the real people and real places of this region:

Photographer Laura McPhee follows in the tradition of 19th-century artistic approaches toward the sublime, relying on a large-format view camera to capture images of exquisite color, clarity, and definition. In images spanning all seasons, McPhee depicts the magnificence and history of the Sawtooth Valley in central Idaho. Her subject matter includes the region’s spectacular mountain ranges, rivers, and ranchlands; its immense spaces and natural resources; the effects of mining and devastating wildfires; and the human stories of those who live and work there. Featured texts set McPhee’s photographs in the context of the work of American predecessors including Frederick Sommer and J.B. Jackson, and discuss her working methods and experiences photographing the evolving landscape. 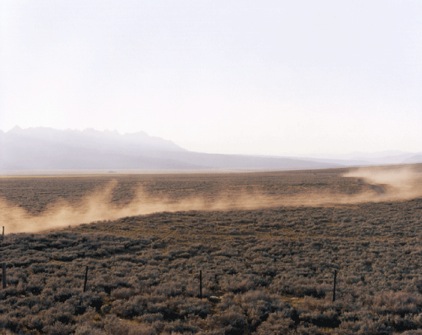 Ms. McPhee first came to Sawtooth Valley as an artist-in-residence through the Alturas Foundation. As she tells Jennifer Tuohy of The Sun Valley Guide, she was expecting to encounter new questions about the relationship of nature to culture, yet also found herself, in the process of getting to know the place and its people, rethinking her relationship to everything from family history to hunting:

Although she was initially overwhelmed by the magnitude of her subject, those first impressions set the tone for what McPhee describes as work she has been preparing all of her life to make.

When she arrived at the top of Galena Pass her thoughts traveled to her grandmother. Raised by a divorced Ohio schoolteacher, she grew up in the early part of the twentieth century, traveling across the West with her mother and sister, living a subsistence life in rudimentary log cabins. “I stood on Galena and I thought about her passing from one mining town to another as a child. And for me that was the hook, an emotional, autobiographical hook. Of course,” McPhee continued with a laugh, “she didn’t arrive there in a white Suburban.”

With thoughts of her late grandmother floating around in her head, McPhee traveled down to the valley floor (in a white Suburban). “The first thing I saw was the sign that says, ‘Headwaters: River of No Return.’ And it struck me, that’s it. Somebody’s experience passes away and passes forward and you never really know exactly what it was like to stand in that person’s shoes or to have that experience, so it’s always an approximation of that. That’s how you understand someone else’s subjective experience or history. So for me, that name really stuck. 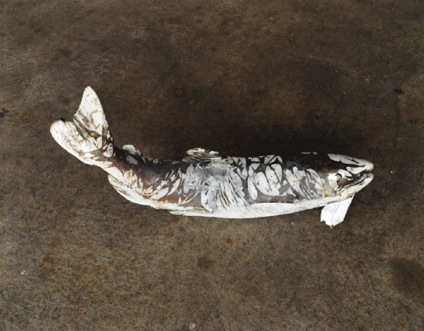 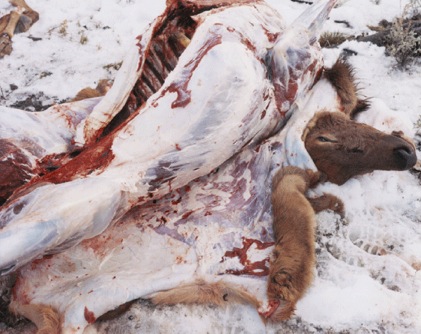