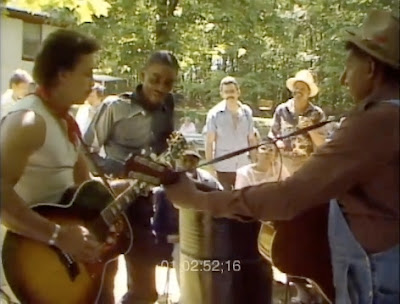 a still from Blues Houseparty
We’ve mentioned Folkstreams many times before–it’s an inexhaustible archive with a mission to stream, free of charge, obscure and out-of-print documentaries on all manner of folk subjects. Eleanor Ellis’s 1996 film Blues Houseparty: Music, Dance and Stories by Masters of the Piedmont Blues is one of the finest gems in the Folkstreams collection; it’s a uniquely comfortable and communal documentary experience.
While many like-minded films can feel overly-anthropological, or can force everyday activities to feel stilted in front of the documentarian’s lens, Blues Houseparty comes off like an incredibly natural distillation of a weekend’s worth of music, laughter, dancing and storytelling. In the midst of such a pleasurable experience, these musicians tell a complicated narrative of race relations in the South, and of the changing attitudes of their generation of African-Americans. In every sense, this is a vernacular experience. Highly recommended.
Here’s an excerpt from legendary musicologist Dick Spottswood‘s review of Blues Houseparty, followed by the full documentary, courtesy of the good people at Folkstreams. Links are provided so folks can learn more about these musicians.

Producer Eleanor Ellis offers Piedmont blues fans a rare front-row seat to a private house party that is as down home and authentic as they come on this 57-minute DVD Blues Houseparty. Filmed in 1989 at the late John Jackson‘s home in Fairfax Station, Virginia, Blues Houseparty includes performances by Jackson and his son James, John Cephas and Phil Wiggins, Archie Edwards, Cora Jackson, Flora Molton and Larry Wise, John Dee Holeman, and Quentin “Fris” Holloway. Between songs, performers talk about the history of country breakdowns, demonstrate traditional dances and swap hilarious stories. The atmosphere is natural and relaxed. The audio and video quality are good. One small criticism: Performers could have been identified earlier in the film. But that’s a small price to pay for admission to this rip-roarin’ good time.