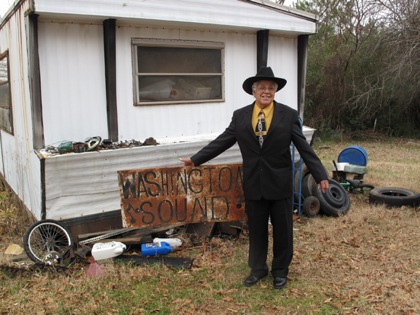 David Lee with the Washington Sound record shop sign, in front of his storage trailer;
Paradise of Bachelors
Long-time readers might remember our piece from last year on the Carolina Soul site and the Paradise of Bachelors record label. POB’s first release, Said I Had A Vision: Songs & Labels of David Lee 1960 – 1988 was one of our absolute favorite records from 2010–and the release has continued to get some wonderful press, so I’d like to start off the week by sharing some of this information. If we’ve hit the summer doldrums (August), this record is the best antidote I can imagine. Paradise of Bachelors is now offering a limited edition LP repressing; folks can find the digital download at iTunes or Amazon Music.

Here’s “You’ve Been Gone Too Long” by Ann Sexton. As the liner notes explain, “the tune must make any list of curious, ‘Jody’ genre songs, for its reference to the archetypal male opportunist who, according to Vietnam-era folklore, would latch onto women whose husbands or boyfriends were serving overseas.”

While we are currently in a golden age of reissues and unearthed music, with more and more coming out each week, what sets Said I Had a Vision apart is its combination of context (rural North Carolina, from the civil rights era to the Reagan era), the  quality of its songwriting, and the absolute exuberance of the performances. Many such records have these qualities in unequal parts, but Said I Had A Vision contains songs that exceed the normal obscurity-fetish that similar records often cultivate. After I play this record through, I generally feel like everyone I know needs to hear these songs.

It should be no surprise, then, that the music press has embraced this record and the regional vision behind the Paradise of Bachelors label, which is co-curated by folklorists Jason Perlmutter and Brendan Greaves. I was excited to learn that Wax Poetics had featured Said I Had a Vision in a recent issue; here’s Jon Kirby:

A man of faith, [David] Lee’s output tended towards the spiritual. And although most benefit from Cleveland County’s proximity to Charlotte’s Arthur Smith and Reflection Studios, perhaps his most generous offering was recorded on location at Mice Creek Baptist Church, in nearby Gaffney, South Carolina. “On My Way Up” by the Relations Gospel Singers showcases the careening lead of Steve Allen, whose exorcism range leaves church-van tracks through a field of delicate piano and choral support, recalling the fly-on-the-wall intimacy of an Allan Lomax artifact. Much of Lee’s color-blind songwriting was realized by the Constellations, a salt-and-pepper ensemble who, during Shelby’s annual Art of Sound Festival last October, proved they could still do “The Frog,” walking sticks in hand. “They were just like kids to us when they started,” revealed wife Nelena of Lee’s most allegiant act. “We was just like a big family, rolled up together.” With the exception of “northern soul” curiosity Ann Sexton, most on Lee’s short-but-sweet roster still reside in Cleveland County, like blue-eyed crooner Bill Allen from nearby Cherryville. “You probably drove past there!” exclaims Lee. “You should have hollered for Bill when you was coming through.”

Further write-ups on the resurgence of interest in Mr. Lee’s work has appeared in Our State magazine and The Charlotte Observer. Earlier this year, Mr. Lee was awarded the Brown-Hudson award by the North Carolina Folklore Society, introduced by Mr. Perlmutter and Mr. Greaves. Afterwards, he gave a performance of “I Can’t Believe You’re Gone” and “I’ll Never Get Over Losing You,” the latter of which appears on Said I Had a Vision:

Paradise of Bachelors will release an LP/download of new material emerging from the South this fall: Poor Moon by the much-loved and critically-acclaimed Hiss Golden Messenger. Also in the works is a release of new and remastered material by Willie French Lowery, a member of the Lumbee Tribe in North Carolina and who has worked previously with the psychedelic bands Plant & See and Lumbee. I’ll include a sample of each artist below; you can also follow the latest Paradise of Bachelors news on their Facebook page.
Tweet