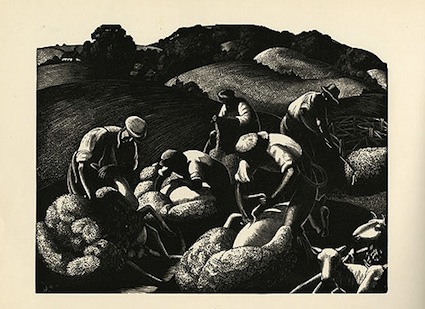 from The Farmer’s Year: A Calendar of Animal Husbandry; Clare Leighton, 1935

In our Readings series, we offer selections from visual and printed texts that offer perspectives, expand dialogues, and challenge assumptions. Today we feature the response of Thomas Hardy to a query by Sir Rider Haggard, who, at the turn of the last century, was working on Rural England, the first study of its kind.

A poet, novelist, and architect, Thomas Hardy chose to spend his life in his home region of Dorset, an area mythologized in his work as “Wessex.” Hardy witnessed in this lifetime the erosion of a rural culture that had been relatively stable for five hundred years. By the 1840s, the Corn Laws removed protections on English agriculture, which changed farming, its labor force, and the population of rural England. As fields turned to pastures, and as laborers fled for better paying jobs in the industrial centers (and those lures of entertainment and cosmopolitan culture), Hardy’s Dorset became a ghosted, alien place in his late poetry.
As a counterpoint, “A Sheep Fair” is also included below.
••••••••••
For one thing, village tradition–a vast mass of unwritten folk-lore, local chronicle, local topography, and nomenclature–is absolutely sinking, has nearly sunk, into eternal oblivion. I cannot recall a single instance of a labourer who still lives on the farm where he was born, and I can only recall a few who have been five years on their present farms. Thus, you see, there being no continuity of environment in their lives, there is no continuity of information, the names, stories, and relics of one place being speedily forgotten under the incoming facts of the next. For example, if you ask one of the workfolk (they always used to be called ‘workfolk’ hereabout–‘labourers’ is an imported word) the names of surrounding hills, streams; the character and circumstances of people buried in particular graves; at what spots parish personages lie interred; questions on local fairies, ghosts, herbs, etc., they can give no answer: yet I can recollect the time when the places of burial even of the poor and tombless were all remembered, and the history of the parish and squire’s family for 150 years back known. Such and such ballads appertained to such and such locality, ghost tales were attached to particular sites, and nooks wherein wild herbs grew for the cure of divers maladies were pointed out readily.
••••••••••
A Sheep Fair
The day arrives for the autumn fair,
And torrents fall,
Though sheep in throngs are gathered there,
Ten thousand all,
Sodden, with hurdles round them reared:
And, lot by lot, the pens are cleared,
And the auctioneer wrings out his beard,
And wipes his book, bedrenched and smeared,
And rakes the rain from his face with the edge of his hand,
As torrents fall.
The wool of the ewes is like a sponge
With the daylong rain:
Jammed tight, to turn, or lie, or lunge,
They strive in vain.
Their horns are soft as finger-nails,
Their shepherds reek against the rails,
The tied dogs soak with tucked-in tails,
The buyers hat-brims fill like pails,
Which spill small cascades when they shift their stand
In the daylong rain.

Those panting thousands in their wet
And wooly wear:
And every flock long since has bled,
And all the dripping buyers have sped,
And the hoarse auctioneer is dead,
Who “Going–going!” so often said,
As he consigned to doom each meek, mewed band