Readings: The Egg And The Machine 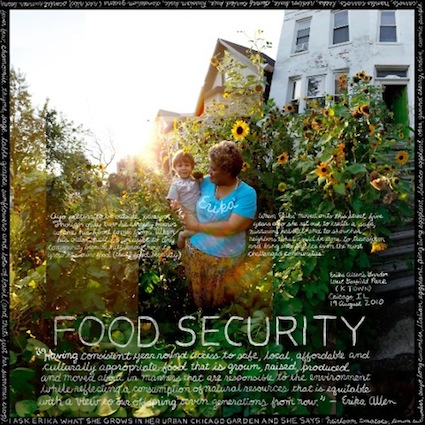 Food Security; larger, high resolution images available at The Lexicon for Sustainability
Today we offer a Readings selection from Robert Frost: his 1923 poem “The Egg And The Machine.”
This work anticipates a perspective that would gain even greater momentum after World War II, as American citizens — many who benefitted the comforts of industrial Empire — began to lament a lost connection with the land, and with agricultural tradition.
As Thomas Hardy would also register, the railroad at once eroded local culture while also allowing for easier commerce (economic, intellectual) with urban areas. To view rural place, or rural traditions, as a “better” or “more honest” than urban life was to engage in a distorting pastoral vision that ignored the intricate links between city and country. This compulsion, still alive and well today, damns the rural to “the past,” and allows people to pick and choose which elements of rural life to celebrate.
Robert Frost, a master of ambiguity and layers of meaning, seems to allude to much of this in his poem (he would no doubt love how The Lexicon of Sustainability illuminates these levels of knowledge) — even the perfectly-rhymed couplets suggest a harmonious pairing that the poem’s narrative sets out to complicate. “I am armed for war,” the speaker concludes. But, Frost leaves us to consider, at what cost?

The Egg And The Machine

He gave the solid rail a hateful kick.
From far away there came an answering tick
And then another tick. He knew the code:
His hate had roused an engine up the road.
He wished when he had had the track alone
He had attacked it with a club or stone
And bent some rail wide open like switch
So as to wreck the engine in the ditch.
Too late though, now, he had himself to thank.
Its click was rising to a nearer clank.
Here it came breasting like a horse in skirts.
(He stood well back for fear of scalding squirts.)
Then for a moment all there was was size
Confusion and a roar that drowned the cries
He raised against the gods in the machine.
Then once again the sandbank lay serene.
The traveler’s eye picked up a turtle train,
between the dotted feet a streak of tail,
And followed it to where he made out vague
But certain signs of buried turtle’s egg;
And probing with one finger not too rough,
He found suspicious sand, and sure enough,
The pocket of a little turtle mine.
If there was one egg in it there were nine,
Torpedo-like, with shell of gritty leather
All packed in sand to wait the trump together.
‘You’d better not disturb any more,’
He told the distance, ‘I am armed for war.
The next machine that has the power to pass
Will get this plasm in it goggle glass.’