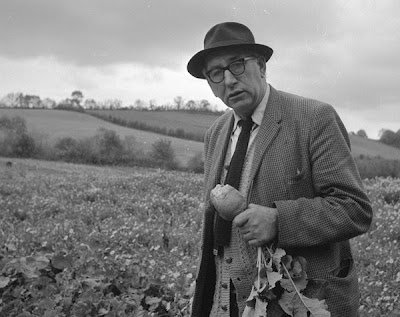 Patrick Kavanagh (1904-1967) was born into a farming family in County Monaghan, Ireland. He spent the first part of his adult life farming those same fields in the small townland of Inniskeen, an experience which gave rise to the long poem many consider to be his masterpiece, The Great Hunger.  Despite the pastoral fantasies many urban poets projected onto the Irish rural, Kavanagh’s poem told the story of the economic, cultural and even sexual poverty of life “beyond the pale.” For its frankness, and for the ways in which it threatened the politically-useful images of “the Irish peasant,” The Great Hunger–as with James Joyce’s Ulysses–was banned in Ireland upon its publication.
In the years following The Great Hunger, Kavanagh continued to present the realities of Irish rural life–but also its communal mysteries. After surviving lung surgery, Kavanagh created a series of lush and circumspect poems that unified rural and urban experience within a timeless and benedictory continuum. (See “Canal Bank Walk”)
Midway through this poetic career, Patrick Kavanagh composed “Epic,” a poem that looks back on his rural place, and its local peculiarities, at the moment when the outside world was bracing itself for World War Two. While poets from Ireland, America and beyond cite “Epic” as an influential affirmation of local culture, Paul Muldoon–one of the rural-born Irish poets to inherit Kavanagh’s concerns–points us towards considering the complications of assigning one “importance” over another. We find this profound and simultaneously ambiguous poem related to many of the recent articles and conversations we have featured:

I have lived in important places, times
When great events were decided: who owned
That half a rood of rock, a no-man’s land
Surrounded by our pitchfork-armed claims.
I heard the Duffys shouting ‘Damn your soul’
And old McCabe, stripped to the waist, seen
Step the plot defying blue cast-steel –
‘Here is the march along these iron stones’.
That was the year of the Munich bother. Which
Was most important? I inclined
To lose my faith in Ballyrush and Gortin
Till Homer’s ghost came whispering to my mind.
He said: I made the Iliad from such
A local row. Gods make their own importance.