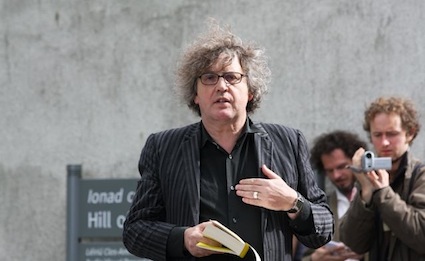 Paul Muldoon was born in the countryside of Northern Ireland, between counties Armagh and Tyrone in Northern Ireland, in 1951. In his poem “Mixed Marriage,” he alludes not only to the sectarian violence of the Troubles, but also to a state of cultural transition that would be familiar to many rural artists on either side of the Atlantic:

My father was a servant-boy.
When he left school at eight or nine
He took up billhook and loy
To win the ground he would never own.
My mother was the school-mistress,
The world of Castor and Pollux.
There were twins in her own class.
She could never tell which was which.
She had read one volume of Proust,
He knew the cure for farcy.
I flitted between a hole in the hedge
And a room in the Latin Quarter.

Muldoon himself has flitted between a number of categories. In the thirty years from the poems in Why Brownlee Left (1980) to Maggot (2010), this poet has made great art out of the chaos of modern life; his work confuses the lines between poetry and fiction (and our expectations of those genres) while also troubling easy cultural distinctions such as “Irish” or “American.” Muldoon has lived in the United States since the late 1980’s, and has served for many years as a professor at Princeton University and Chair of its Lewis Center for the Arts. For the last five years he has also served as Poetry Editor for the The New Yorker, guiding the most visible outlet for poetry published in America.
Despite this prestigious curriculum vitae, Muldoon remains a humble and open-minded figure on the literary landscape. In his more recent work, notably 2002’s Moy Sand and Gravel, the poet has returned with new intensity to consider the history, culture, and language of his birthplace along the border. We see Muldoon demonstrate his gift for balancing this knowledge of the rural with his encyclopedic grasp of modern literature in this excellent interview piece for Wunderkammer Magazine:

The Moy that Muldoon returns to in his 2002 collection is one conscious of its place alongside many borders — those between traditional and modern culture, the rural and the urban, and between a deep, almost archeological, past and a fluid present tense. In his poem “The Misfits,” which places a viewing of that famous film written by Arthur Miller (with the last on-screen appearances by Clark Gable and Marilyn Monroe) alongside his childhood duties on the farm, where he mines a row of potatoes, “what would surely seem / to any nine- or ten-year-old an inexhaustible seam.”

This pun on visual representation and human creation finds succinct and powerful articulation in the title poem, “Moy Sand and Gravel.” Paul Muldoon’s website offers a reading of the poem here; please find the text below:

To come out of the Olympic Cinema and be taken aback
by how, in the time it took a dolly to travel
along its little track
to the point where two movies stars’ heads
had come together smackety-smack
and their kiss filled the whole screen,

those two great towers directly across the road
at Moy Sand and Gravel
had already washed, at least once, what had flowed
or been dredged from the Blackwater’s bed
and were washing it again, load by load,
as if washing might make it clean.