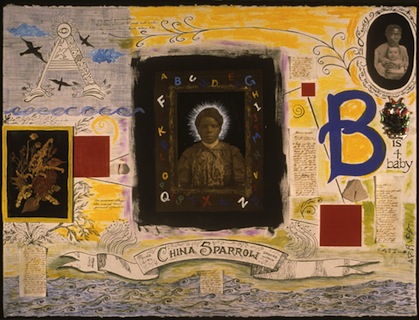 Remembering China Sparrow; Lynn Marshall-Linnemeier
We would like to start off this week with news of a effort that seeks to expand both cultural and artistic awareness: The Affrilachian Artist Project.  In addition to their mission, this project is also in the final stages of a Kickstarter campaign to raise funds to begin to film and document the work of some of the group’s senior members.
The Affrilachian Artist Project is seeking to establish “a sustainable community-building platform for artists of color from and inspired by the Appalachian region.” As director Marie T. Cochran notes in the group’s introduction, the term “Affrilachia” came about originally through the work of Frank X Walker, Nikky Finney and the vibrant Affrilachian Poets group that emerged in the early 1990’s. Cochran originally presented work from the visual artists at the Affrilichian Poets’ 20th anniversary celebration last year; during her time at that symposium, however, she realized that part of the larger narrative was missing:

Through an array of fragments, a pattern revealed itself. The Affrilachian Poets were the WORD, the Carolina Chocolate Drops were the SONG; yet sustained attention has not been given to the visual artists who create the OBJECTS and IMAGES of the people and the places evoked by similar life experiences. A third harvest should flourish in this fertile soil.

This harvest has already begun, first with an exhibit at the August Wilson Center for African American Culture entitled Affrilachia! Where I’m From, and, building upon that popular and critical interest, with an effort to begin filming, documenting, and sharing this work. These artists range in style from the environmentally-minded installations of DeWayne Barton to the mixed-media storytelling of Lynn Marshall-Linnemeier, from the socially-conscious assemblages of Kyle and Kelly Phelps to the dance between abstraction and representation in the paintings of Valeria Watson-Doost. There’s much more work to explore on the project’s artists page.

As Cochran mentions in on the project’s Kickstarter page, The Affrilachian Artist Project adds to “recent efforts celebrating the history of Appalachia [that] reveal the fact that the region’s inhabitants are as diverse as its terrain.” Organizations such as Appalshop and The Hillville have expanded our understanding of this landscape; below, Cochran offers the four misconceptions about Appalachia illuminated in Jeff Biggers’ book The United States of Appalachia:

Biggers identifies four paradoxical images that have persisted about the region. The pristine Appalachia, though it is touted a vacationer’s playground according to slick promotional brochures, it is a battleground of fierce clashes between environmentalists and commercial interests over timber, coal and a number of natural resources; Anglo-Saxon Appalachia, once defined by Merriam-Webster’s Collegiate Dictionary as mountain region of “white natives,” despite its role as a crossroads of indigenous cultures as well as vast immigrant and African American migrations for centuries; backwater Appalachia, a “strange land of peculiar people” caricatured in thousands of popular culture formats from comic books to feature films, though the region has produced some of the most important thinkers and creators in the nation (including African Americans like Carter G. Woodson who established the first official celebration of Black History, Booker T. Washington, Bessie Smith, Nina Simone, Bill Withers, Nikki Giovanni and Henry Louis Gates to name a few) and pitiful Appalachia, the poster region of rural poverty, regardless of the tremendous revenue generated by its mineral resources, timber and labor force in the mines, mills and factories, and today’s tourist industry.

The Affrilachian Artist Project promises to help replace these “paradoxical images” with paintings, collages, and sculptures that speak from authentic experience and artistic practice. Please find the video for the project’s Kickstarter campaign, which enters its final week today:
Tweet