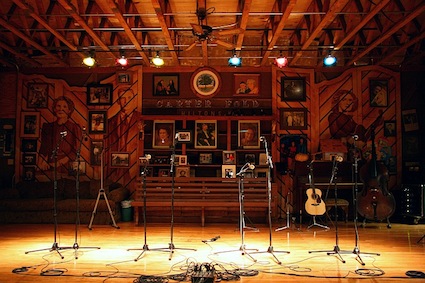 Photograph by William W. Robinson of Friends of the Carter Family Fold
[Editor’s Note: As I am facing numerous writing deadlines over the second half of February, this seems like a good time to give a retrospective glance to the first two years of Art of the Rural. Over these weeks I will feature a few new articles, but also many favorites from the archives. Thanks again to everyone who has read and contributed; what began as a labor of love has become a project far larger, and far more rewarding, than I ever could have anticipated – and I deeply appreciate the readership and participation of such a diverse audience. In March we will offer new articles and series, and share some new projects related to our mission. ]

“He insisted on walking into the Fold that night,” Hiltons resident Pat Jones told me a week after Johnny’s performance. “They wanted to bring him in using a wheelchair, but he said no, he wanted to walk up to that stage himself.”

Whenever I have friends that are looking to take a trip somewhere, one of the first places I recommend is The Carter Family Fold in Hiltons, Virginia. A few years back, I had the chance to attend one of their Saturday evening concerts and hear Janette Carter sing “I’m Thinking Tonight of my Blue Eyes.” It’s one of the songs that her father and mother, A.P. and Sara, along with aunt Maybelle, immortalized in an early Carter Family recording. Though Janette was frail, she was helped to the stage so that she could take the autoharp and begin the night’s music with that selection from her family’s legacy.
As she sang, I looked around. Underneath the generous tin roof, families and young couples sat and listened, children ran across the dance floor in front of the stage. It was an atmosphere and an inter-generational audience that harkened back to a time when traditional music–folk music–was actually sung and enjoyed by “folks”, not cloistered behind the turn styles of cafes and concert venues. Ms. Carter and her brother Joe created the Fold in 1979 to honor her family and to give a piece of her family’s heritage back to the community. When I walked in, I felt at home: large paintings of the Carters adorned the stage, homemade chili and pie beckoned from a window in the back, and a sign reminded me this was hallowed ground: no smoking, no drinking, no cursing.
A few months after Ms. Carter’s song, she passed away. Here’s Joe Wilson, President of the National Council for the Traditional Arts, remembering Ms. Carter and her legacy at the Fold:

Janette was not the Carter with the husky, penetrating female voice, perhaps the finest country female lead of all time. That voice belonged to her mother, Sara. She was not the lead guitarist who invented country guitar lead with its “church lick” and unrelenting emphasis of melody. That guitarist was her Aunt Maybelle. She wrote songs, but was not the greatest composer and arranger in country music history. That person was her father, A. P. Carter. She never married anyone famous, and individual fame never came to her. The Carter Family was a depression-era band that broke up after a mere 14 years, and Janette and her father returned to the Virginia mountains with considerable fame, but no cash. She worked as a cook at the elementary school, and raised her family. But she promised her father to keep his legacy, and that promise was kept in a hall she financed and her brother Joe built in the style of a burley tobacco barn. There she presented the local artists she adored and the famous who came to borrow bits of Carter magic. She kept the prices low and the quality high. She had time for the most humble, and enough love to fill this valley beside Clinch Mountain.

The Carter Family Fold site has a lot to offer. First and foremost, you can check out their show schedule and also, if distance is an issue, purchase a ticket to the streaming video archive of dozens of recent shows. The grounds also serve as a preservation site for A.P. Carter’s cabin as well as a family museum. Also worth visiting: The Friends of the Carter Family Fold has a wonderful selection of photographs and streaming music of the later generations of Carters to follow A.P., Sara and Maybelle.

One of the Fold’s other rules: no electric instruments. This rule was waived for only one person: Johnny Cash, the husband of her cousin June and a frequent visitor to the Fold. On July 5, 2003, two months before his death, Mr. Cash made an unpublicized return to the stage in Hiltons for what would be his final public performance.

The Ovation began with those closest to the entrance that had been blocked off for his arrival. As the wave rippled across the audience, people took to their feet when Johnny emerged from his car, before he even stepped foot inside the Carter Fold and well before he sang a note.

Dressed head to toe, naturally, in black, he did indeed walk through the doors, slowly and propped up by two assistants. John Carter Cash, his only son, supported him from behind. The crowd parted, and he stopped and rested a few moments before attempting the three stairs that led to the small wooden stage. His body was frail, but his face still evoked the authority of an Old Testament prophet. he smiled bashfully at the thunderous reception.

Bursts of applause greeted each point of this 10-minute journey and reached a crescendo at the familiar opening notes of his first song, “Folsom Prison Blues.” Although the backs of his hands appeared darkly bruised, Johnny played an acoustic guitar, as did his son. The wild greeting continued with his next number, “Sunday Morning Coming Down.” Cries of “We love you, Johnny!” broke through the cheers.

Then he spoke to the crowd. “I don’t really know what to say about how I feel tonight, being up here without her.”

He placed only the slightest emphasis on that last word. The place fell silent for the first time that evening. Johnny sighed, his chest rising and falling slowly as he looked down at the guitar he quietly strummed. “June and I were together 40 years, and the pain is so severe, there’s no describing it. You lose your mate, the one you’ve been with all those years, and I guarantee you it’s the big one. It hurts so bad…it really hurts.

“But every day the last week or so, it seems to be getting a little bit better, knowing that I was coming up to celebrate her birthday and the excitement of all that. Coming to her old homeplace here on the banks of Clinch Mountain, where we spent so much time and had so much love for each other. I just wish I could share it with you, how we felt about each other.” he stared unseeingly down at the stage for a moment, then looked again toward his audience.