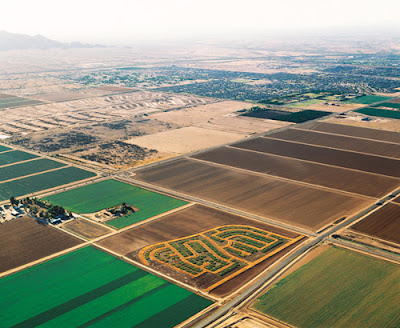 the Moore Estates installation; from 20×200
We will be writing in depth about farmer and photographer Matthew Moore’s vision for the intersections of art and agriculture shortly in this space, but today we wanted to share with everyone this video for his upcoming project: The Digital Farm Collective.
This crowdfunded project, through United States Artists, only has only two days left to reach its goal. As folks will see below, Mr. Moore’s project aims to both address the issues of suburban sprawl, the “rural brain-drain,” and, more broadly, the future of agriculture itself. Mr. Moore is a fourth-generation farmer from Arizona, an artist who has lived the interconnections betwee sustainable agriculture and artistic practice. There is a personal mission, as well as an aesthetic one, behind this project–as with this previous project The Urban Plough, which used aerial photography and mapping so that an audience could visualize how suburban developments are eating away at the farmland in his region.
The project’s introductory video is included below, along with an artist’s statement. More information on The Digital Farm Collective, along with details on the rewards for pledging to help can be found here.

Introduction to the Digital Farm Collective from Matthew Moore on Vimeo.

I am a fourth generation farmer whose land and life are quickly being overcome by suburbia. Because of the encroachment I was inspired to create the ‘Digital Farm Collective’ to collect and share the images from the most important daily process of agriculture, the growth of our produce. Using time-lapse photography, I have begun the process of filming everything I grow, and inviting other farmers to do the same. The arranged short films show a single production cycle of each plant/tree. Ambient noises are taken from the farm and plants while growing, and musicians inspired by the footage are invited to compose music to accompany the films.

The films will be used to educate consumers on the produce they purchase by showing the growing process as it happens in the field, reconnecting them to the land and time based concepts integral to the agricultural process. This project is a part of a larger effort to create an international database which conserves footage of plants grown across the globe. What is being created is a digital film herbarium that will build from growers filming their best crops, telling the story not only of the plants, but of the farmers and families as well.

We have created time-lapse photography packages to send to farmers to film their crops. Each package will include camera equipment, weather and soil monitoring system, file transferring hardware and instruction manuals. We will compile the data into short films for general audiences and map the soil and growing conditions through the data garnered in the units for scientific and future growing knowledge