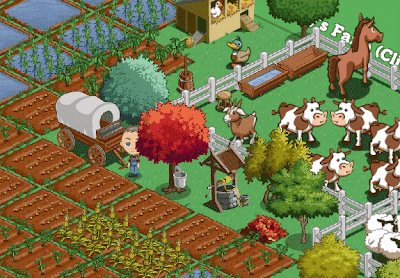 From an investigation in progress:

Exhibit A: “To Harvest Squash, Click Here,” a introduction by Douglas Quenqua of The New York Times.

Scott Simon: Something just occurs to me, this is dime-store psychology, but the number of people who are actually farming in this country is in decline and has been for some time. I wonder if farming has now become as fanciful as Space Invader games for millions of Americans.

Dean Takahashi: Yeah, its a fantasy. Its something they wish they could do but they can no longer do in a big crowded city. People just want to get back to something simpler. It almost reminds me of the organic movement – you know, they’re very interested in where their foods come from these days. And in the same way, here you get to grow your own foods.

Exhibit E: This recent episode of Dr. Phil. Here’s a segment of the transcript:

“I’m very concerned with my mom’s obsession with all of these Facebook games. She’s constantly on the computer, and she neglects all of her responsibilities,” says Teresa’s daughter, Jennifer. “I just feel like she’s too busy for us, because Facebook has taken over who she is.”
“Before I came here, I made sure that none of the crops were going to die,” she replies.
Dr. Phil takes a seat on the stage across from Teresa. “There aren’t really any crops,” he informs her. “That’s just a little image on a screen. They’re not going to die.”
“I know,” she answers.