The Language Of Natural Gas Leases 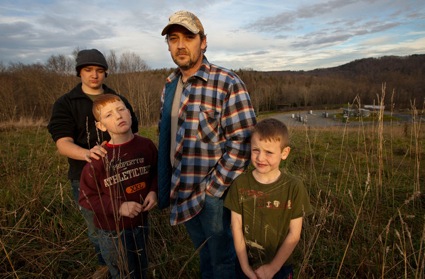 The Ely family on their land in western Pennsylvania; Ruth Fremson, New York Times
This morning Ian Urbina and Jo Craven McGinty of the New York Times have published “Learning Too Late Of Perils In Gas Well Leases,” the latest installment in the NYT’s Drilling Down series.
While much mainstream press on natural gas drilling, or “fracking,” has focused on environmental impact, these writers have taken the time to address the immediate local, and rural, issue at stake here — many of the families and landowners signing these leases are not properly informed by landmen and lawyers about the terms of their legal agreement.
In my home region of the Ohio Valley, the influx of new natural gas leases has been the story of 2011, yet the profound tragedy of this newfound wealth is that some of these landowners will be living with the fine print of these agreements for decades. Their land, environment, lifestyle, and even the earning potential for the natural resources they own, will be dramatically affected. Sadly, the work of Mr. Urbina and Ms. McGinty is a sign of things to come, what is set to be a chronic point of discussion for decades in rural America.
Here is the introduction to their piece:

After Scott Ely and his father talked with salesmen from an energy company about signing the lease allowing gas drilling on their land in northeastern Pennsylvania, he said he felt certain it required the company to leave the property as good as new.

So Mr. Ely said he was surprised several years later when the drilling company, Cabot Oil and Gas, informed them that rather than draining and hauling away the toxic drilling sludge stored in large waste ponds on the property, it would leave the waste, cover it with dirt and seed the area with grass. He knew that waste pond liners can leak, seeping contaminated waste.

“I guess our terms should have been clearer” about requiring the company to remove the waste pits after drilling, said Mr. Ely, of Dimock, Pa., who sued Cabot after his drinking water from a separate property was contaminated. “We learned that the hard way.”

If folks are living in an area that still being courted by natural gas companies, this is absolutely essential reading; beyond the local dynamics of this story, we encounter here an early volley in a concern which will no doubt snowball in size as drilling starts to occur in earnest in these areas – and lawsuits, community action, and, hopefully, a national conversation emerge.