The Odyssey Of Double Edge Theatre 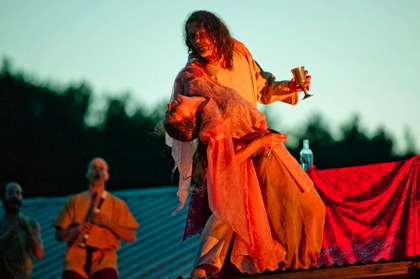 Still shot from The Odyssey; more photographs available on Double Edge’s Facebook page
Last week I wrote “What We Talk About When We Talk About The Rural” in response to recent NPR coverage of rural issues, and I promised to offer a series of examples for how we might use arts and culture to expand the current dialogue on rural America. Instead of a list, I’d like to present this week’s articles as points from which to move the discussion forward.

Today we begin with Double Edge Theatre, located on their Farm in Ashfield, Massachusetts. I first learned of this unique gathering of actors, directors, artists, and farmers at The National Rural Assembly, when I had the opportunity to meet Double Edge’s Core Actor and Co-Director Matthew Glassman. After a day of discussing the challenges (and assets) in rural America, I sat down with Matthew to learn more about Double Edge–and I was deeply inspired by what he shared, a visionary sense of what a community can accomplish together in a place. After a full day of the Assembly, hearing Matthew’s story of Double Edge was a moving reminder that we choose to live in (and advocate for) rural America because of its culture, its deep history (and our relationship to that history) and because we feel a sense of possibility in this space that we can’t find elsewhere.

Instead of my own string of superlatives, I’ll let the folks at Double Edge offer their introduction below:

Double Edge is more than a theatre: it is a center for discovery. Its activities include year-round theatre training, indoor and outdoor performances, and community events. The theatre’s highly physical performances are immersive events that are lush and dreamlike, nuanced and emotional. Each original performance is created by an ensemble of multi-talented artists who have worked together over many years and are bound together by regular, strenuous training. These works are toured nationally and internationally, creating further opportunities for reciprocal exchange between artists and audiences. Double Edge’s training methodology attracts students from all over the US and the world to The Farm to learn challenging techniques that enable them to physically and visually craft an original theatrical landscape. Interns and apprentices also work in our gardens, on our buildings, and take part in the administration of the company in order to learn about the context of making art and producing and sustaining a theatre company.

What’s extraordinary about the work of Double Edge is that their vision is local, national and international. They cultivate a connection with Franklin County, Massachusetts that “embodies the concept that good art makes thriving communities, and supports historic and commercial value in ways that engage local residents’ perceptions of what is possible;” in keeping with this, Double Edge maintains a presence in a number of local schools and community organizations. In addition, their Chagall Cycle will take Double Edge across the globe over the next few years for five site-specific performances inspired by episodes in the peripatetic life of painter Marc Chagall; thus, art created (or envisioned) in Western Massachusetts will meet with new cultural perspectives in Argentina, Russia, Israel, and France.
This summer featured The Odyssey, an installment directed by founder and artistic director Stacy Klein, which was offered to audiences at The Farm in Ashfield (and co-presented by the Charlestown Working Theater). For this performance, Double Edge used 82 lithographs Chagall created between 1974 and 1975 to imagine Homer’s Odyssey across the space of their farm. The audience is asked to follow the actors through the farm’s space, as scenes from this spectacle take place in the structures, fields, and waterways on The Farm. Actors perform in the trees, spring from the water on bungee cords, and treat their physical surroundings as an integral character in the story. 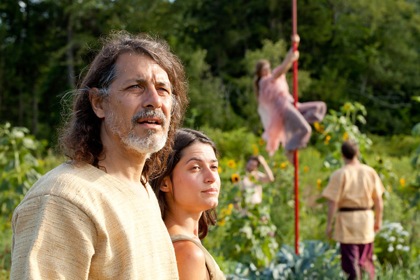 Odysseus (Carlos Urlona) with Calypso (Jeremy Louise Eaton); David Weiland
As with all of Double Edge’s work, the reviews have been unabashedly enthusiastic. Here’s Terry Byrne writing in the Boston Globe:

Five senses hardly seem enough for “The Odyssey,’’ Double Edge Theatre’s annual “summer spectacle,’’ a sumptuous sensory feast that resonates on so many emotional and intellectual levels. The third in a series of productions inspired by the paintings of Marc Chagall (the other two were 2009’s “Arabian Nights’’ and 2010’s “The Firebird’’), “The Odyssey’’ effortlessly integrates whimsical aerial adventures and puppetry with thoughtful explorations of loyalty and loss, regret and determination, all set within a loose framework of murals and motifs from Chagall’s evocative paintings.

The evening opens with the audience gathered under a tent as John Pietso, accompanied on lute, sings us into Odysseus’ tale. As we listen, we look out on Nancy Winship Milliken’s huge woolen sails as they wave gently in the breeze, changing colors in the sunset just beyond the tent. Like a Pied Piper, Pietso leads the crowd into a pavilion where we meet Odysseus’ son, Telemachus (Matthew Glassman), who rails against his mother’s crowd of drunken suitors eager to take over in Ithaca the moment they are sure Odysseus is dead. Each step casts a more enchanting spell until it’s easy to forget we are wandering indoors and outdoors over several acres of Double Edge’s Farm, and simply believe we’re with Telemachus as he meets Sparta’s King Menelaus (Kieran Smyth) and his queen Helen (Tanya Elchuk) perched gracefully on the wooden Trojan horse Odysseus created that turned the tide in the war for her.

I’d encourage folks to listen to Monte Belmonte’s radio piece broadcast Northampton’s WRSI as well – the sounds of the performance and the audience’s response give those of us who can’t make it to Ashfield a sense of what we’re missing.There’s much more to explore on The Double Edge Theatre site, as well as on their Facebook page, which offers some excellent galleries of images from these performances and from the extensive training beforehand (for instance, for The Odyssey, actors trained with the New England Center for Circus Arts). You’ll also find this video of an appropriate pre-performance training for a group of artist such as Double Edge, in the weeks before bringing the travels of Homer and Chagall to life in Western Massachusetts:
Tweet