The Plains of Sweet Regret 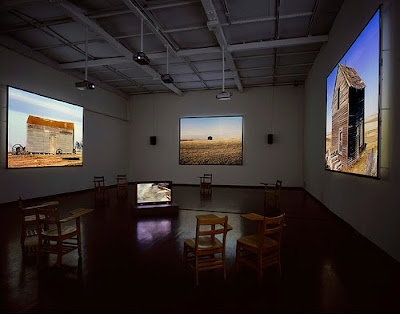 installation photograph by Rik Sferra
Last week we discussed The North Dakota Museum of Art and their Rural Arts Initiative, and I’d like to return this week to another of the exhibits that has recently been touring the state–and also the nation. Mary Lucier’s The Plains of Sweet Regret was commissioned by the NDMOA as part of its Emptying Out Of The Plains initiative that aims to look at the changing face of the northern plains.
Ms. Lucier’s work engages with the rural-urban interchange yet, unlike many of the projects we’ve highlighted in these virtual pages, she is coming from the opposite side of the transom–as an urban artist looking to create honest and provocative video projects that speak to the challenges facing rural communities of North Dakota. Her collaborations with these communities already yielded 1998’s Floodsongs, a video project that was a response to floods along the Red River in 1997. The piece opened at the NDMOA to great accolades and was later exhibited at The Museum of Modern Art in New York.
Here’s Laurel Reuter, president of the NDMOA, writing in introduction to The Plains of Sweet Regret:

At the turn of the twenty-first century, Mary Lucier began to visit North Dakota, traveling across seasons and time, into the far northwest corner of the state. Seismic change has forced the people of the Northern plains to re-imagine their lives as family farms, small towns, and rural communities have shrunk to nothing. The land is now occupied by agribusiness; the lone farmer, the cowboy, migrant workers and field hands have gradually moved on. The remains dot the landscape like the skeletons of fish washed up on far distant shores.

Mary Lucier’s eighteen-minute, five-channel video installation creates the experience of moving through the landscape, across the prairies and the plains, and into the West of the imagination–the West, which, if it ever existed, lies in ruins.

The Plains of Sweet Regret is part of the North Dakota Museum of Art’s much larger Emptying Out of the Plains initiative. Photographers, film makers, poets and essayists have been commissioned to create work that marks this moment in the history of this northern land. Their charge is difficult. Endless photographs and video footage of abandoned towns and farmsteads already exist—most overwhelmingly sentimental. How does an artist grapple with the essence of loss and then expose the ambiguity at its core? Mary Lucier wanders with her camera into these deserted places—empty, forlorn, littered with the remnants of human life. She films a doll, a school desk, a bowling trophy, cast aside, all stripped of their former usefulness. The churches and the schools and the homes, once filled with immigrants’ dreams, now house the wind. Only nature’s creatures come to call. The Plains of Sweet Regret is a lyrical ode to this lonely and desolate place, to a shifting in time, and to an untested future.

This video installation has been touring the country as well, and reviewers and audiences have noted how the out-migration in North Dakota expressing itself in the communities all throughout the western part of the United States. The Amon Carter Musuem in Fort Worth, Texas recently featured this exhibit, and, in part, framed the work along those lines. Here’s Assistant Curator of Photographs Jessica May discussing the project with Ms. Lucier:
Tweet