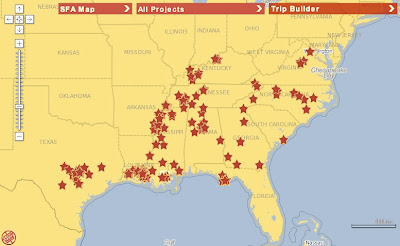 The Southern Foodway Alliance’s Oral History Interactive Map Project
We think these stories offer far more than just sustenance–we think they offer a way of thinking about race and class, gender and ethnicity, those deeply important issues that have long vexed and long defined the South.  – John T. Edge, Director of the Southern Foodways Alliance
Earlier this summer, when writing about corn cob wine and the new online food culture magazine The Zenchilada, we discovered The Southern Foodways Alliance. While some of our readers may already be familiar with the wide variety of cookbooks, traveling events and documentary work of the SFA, we had yet to discover them–and our first visit to their site was a bona fide moment of culinary revelation.
The organization projects an ambitious mission, to “stage symposia on food culture, produce documentary films, publish compendiums of great writing, and—perhaps most importantly—preserve, promote, and chronicle our region’s culinary standard bearers.” What is plainly evident across their various efforts (from cookbooks to “okracasts“, video documentaries to oral histories) is that the SFA is able to consider both the Southern past and its present, and to locate what it calls “the spirit of reconciliation” that gathers across these foodways:
The SFA site is currently featuring about two dozen documentaries it has created in conjunction with The Center for Documentary Projects at The University of Mississippi. They all are outstanding, and we’ll include one below. Here’s Eat or We’ll Both Starve, a film by Joe York about the Taylor (MS) Grocery, a legendary catfish joint with a series of time-honored rules that encourage their patrons to sit down, slow down, and get to know their neighbors.
The SFA has also done extensive oral history work–see the interactive map above–and many of these interviews and field recordings are accompanied with photographs. Aside from individual oral histories, the SFA has a few regional food culture projects: The Southern BBQ Trail, The Southern Boudin Trail, The Southern Gumbo Trail, The Mississippi Delta Hot Tamale Trail and Wine in the South.
In addition to all of this, The Southern Foodways Alliance also operates a fascinating blog that features reports from folks who are cooking their way through the SFA’s publications, as well as reports from the organization’s interns. Check out the recent post by intern Kevin Kim on documenting the presence of Chinese American grocers in the Delta:

First introduced to the Mississippi Delta as indentured servants by planters during Reconstruction, these early Chinese sojourners soon became disenchanted with working in the fields and moved off the plantation to set up small grocery stores nearby. Mainly serving as an alternative to plantation commissaries and catering to a predominately African American clientele, the Chinese American grocer was a mainstay in many Delta neighborhoods well into the 20th century. Though their numbers have diminished in recent years, their history is an important part of the foodways of the Delta.