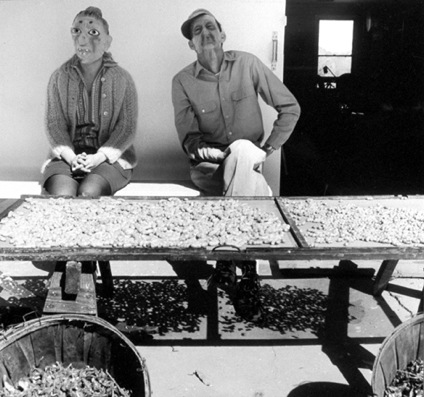 Wendell and Tanya Berry in The Family Album of Lucybelle Crater; Ralph Eugene Meatyard
• Lisa Pruitt of Legal Ruralism – an Ozark native and a law professor at UC-Davis – visited Alice Walton’s Crystal Bridges Museum of American Art on its opening day, and she contributes this reading of what the space offers, and what it might lack:

[Ada Smith of The New York Times] mentions an interesting gap in the Crystal Bridges collection–indeed an ironic one: “the almost complete lack of paintings by largely self-taught or folk artists.”

This omission is especially noteworthy because rural America is so often associated with the common man, as well as with other connotations of folksy.

And, indeed, the museum is reaching out to the “common man” or–more precisely–the common child. Smith notes the museum’s “ambitious education program, which will reach out to more than 80,000 elementary students in the area.”

• Producers Hal Cannon and Taki Telonidis of the Western Folklife Center and the What’s In A Song project recently shared this moving story about a singing group formed by friends of folklorist Barre Toelken to help him re-learn the nearly 800 songs he lost after his stroke. The piece originally aired last weekend on NPR’s Weekend Edition Saturday, and can be heard here.

“I used to know 800 songs,” Toelken says. “I had this stroke, and I had none of these songs left in my head. None of them were left.”

But, Toelken says, he soon discovered that, with a little positive reinforcement, he could remember some of the forgotten music after all.

“A little bit at a time, I realized I still had the songs in my head,” he says. “So now I meet with this group of friends once a week a week, and we sing.

• Kyle Munson of The Des Moines Register is one of our favorite journalists – he covers the wide panorama of Iowa with great insight and creativity. This week he traversed the state on a “full Grassley” tour of all 99 counties, taking stock of the state of Iowa after the Republican primaries and the fallout from Stephen Bloom’s article in The Atlantic. Folks can read his latest report from the road here; his Facebook page also contains extra photographs from this Midwestern Odyssey.

I’m following the shortest possible path through all 99 counties, roughly counterclockwise around the state with the start and finish line both in Des Moines. As I type this Tuesday afternoon, I’ve hit 15 counties — or about 406 out of 2,738 miles on the official GPS itinerary.

Unlike a presidential candidate, I don’t have the benefit of a hired driver, plush bus or quick-fire stump speech. It also takes time to pry introspective views from Iowans in each county with persistent questions.

But also unlike a candidate, I’m not using these 99 counties as a steppingstone. My simple goal is to glean a more precise, updated sense of the state at the start of a new year.

• In the land where the pastoral genre began over two millennia ago, young Greeks are leaving Athens and returning to the rural. Here’s Rachel Donadio writing in The New York Times:

Nikos Gavalas and Alexandra Tricha, both 31 and trained as agriculturalists, were frustrated working on poorly paying, short-term contracts in Athens, where jobs are scarce and the cost of living is high. So last year, they decided to start a new project: growing edible snails for export.

As Greece’s blighted economy plunges further into the abyss, the couple are joining with an exodus of Greeks who are fleeing to the countryside and looking to the nation’s rich rural past as a guide to the future. They acknowledge that it is a peculiar undertaking, with more manual labor than they, as college graduates, ever imagined doing. But in a country starved by austerity even as it teeters on the brink of default, it seemed as good a gamble as any.

• We learned from The Rural Blog of Honest Appalachia, a wikileaks-inspired site working to increase transparency in Appalachia and “to assist and protect whistleblowers who wish to reveal proof of corporate and government wrongdoing to citizens throughout the region.”
• The National Council For The Traditional Arts posted video to their Facebook page of Los Texmaniacs, who “combine a hefty helping of Tex Mex conjunto, simmer with several parts Texas rock, add a daring dash of well-cured blues, and R&B riffs,” as these musicians describe their unique groove:
• The Big Read Blog offers some links to consider the presence of immigrants in Willa Cather’s My Ántonia:

When Cather published My Ántonia in 1918, the book was a major departure from the literary trends of the day. She not only strayed from the urban settings and themes that were fashionable at the time, but her characters were also new to contemporary American fiction—they were common folks and, even rarer for the time, many of them were immigrants, all presented with genuine dignity.

The links above include an audio guide and documentary that also features the perspective of the real-life Ántonia’s granddaughter.
• If you are currently digging out from the first winter snow of the year, then Sara Jenkins’s article in The Atlantic on the art of picking olives in an Etruscan hill town will be a welcome respite. On the subject of rural-international terroir, folks may be interested in Extra Virginity, a new non-fiction book on the history, culture, and industrialization of olive oil by Tom Mueller. NPR’s Fresh Air sat down for a fascinating conversation with him in November; a trailer for the book project is included below:
• The header image for this Weekly Feed comes from Ralph Eugene Meatyard (1925-1972), a prolific photographer born who was born in Normal, Illinois but spent the majority of his life in Lexington Kentucky. He worked as an optician during the week, but, when the weekend came, Mr. Meatyard produced some of the most singular photography of the last century: intimate, irreverent, and at times terrifying.
The artist collaborated with many members of that era’s extraordinary arts scene in Kentucky – folks such as Wendell Berry, Thomas Merton, and Guy Davenport. Much of his photography used the abandoned homes and farms as settings, and Mr. Meatyard also collaborated with Mr. Berry on The Unforeseen Wilderness: Kentucky’s Red River Gorge. 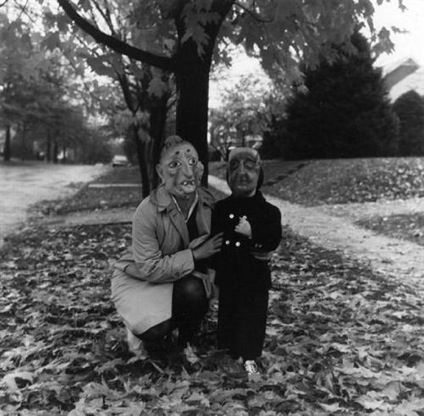 After news of a cancer diagnosis, the photographer devoted the remainder of his days to The Family Album of Lucybelle Crater, which featured his children and his friends wearing plastic masks and posing in normal situations. Though the idea of such a series might sound bizarre, the totality of this project offers a moving meditation on friendship, family, and mortality.
Unfortunately, though Mr. Meatyard’s photography is becoming more widely known, no central site yet exists in which to discover the breadth of his work. The International Center for Photography housed and exhibition in 2004 that offers the best resources yet – and a little research here, as well as a Google image search, will reveal startling results.
Tweet