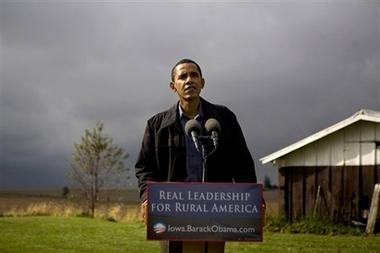 Yesterday, by Executive Order, President Barack Obama announced the formation of the White House Rural Council, a cabinet-level group charged with assessing both the challenges and the unique assets inherent in Rural America. This is a historic announcement, the first such high-level council with an explicit focus on rural development. Here’s an excerpt from the press release:

“Strong rural communities are key to a stronger America,” said President Barack Obama. “That’s why I’ve established the White House Rural Council  to make sure we’re working across government to strengthen rural communities and promote economic growth.”
The White House Rural Council will coordinate programs across government  to encourage public-private partnerships to promote further economic  prosperity and quality of life in rural communities nationwide. Chaired by  Secretary of Agriculture Tom Vilsack, the Council will be responsible for providing recommendations for investment in rural areas and will coordinate Federal engagement with a variety of rural stakeholders, including agricultural organizations, small businesses, and state, local, and tribal governments.
“Rural America makes significant contributions to the security, prosperity, and economic strength of our country,” said Agriculture Secretary Tom Vilsack. “The Rural Council announced by President Obama shows his continued focus on promoting economic opportunity, creating jobs, and enhancing the quality of life for those who live in rural America. Together with the rest of the Obama administration, USDA has worked to support families and businesses in rural communities so that their success will pay dividends for all Americans.”

Next week we’ll offer more of our perspective on this news, but until then, the full detailed press release can be viewed here. While, of course, there are political benefits to such a council’s formation, this news is promising–and we will be following the arts and culture dynamic to this Council as the story develops. We’re curious how a representative from the National Endowment for the Arts might contribute to this discussion.
Last year, on the eve of the midterm elections, I contributed this reflection on Candidate Barack Obama’s unannounced campaign stop in my hometown of Smithfield, Ohio–days before the 2008 vote. This week, his White House Rural Council is charged with addressing the needs, and the very real frustrations, of these same folks he met for a few brief moments:
Two Years Later in One Rural  Town
A little over two years ago, Senator Barack Obama campaigned through the Ohio Valley on the eve of the presidential election.  En route from one rally to another, his tour bus passed through my hometown of Smithfield, Ohio. In an unplanned move, the candidate stopped for a brief moment to greet folks who had gathered to cheer along the motorcade. I’m grateful that someone with a digital camera captured this moment for posterity; as the candidate emerges from the long-awaited bus, he seems almost to be returning from a moment of goodwill that we have since misplaced.
When Obama pulled out of Smithfield, Ohio, what he left was a town still resilient in the face of many of the same issues that haunt all of rural America. The main street our future President stood upon was shadow of its former glory–abandoned businesses, dilapidated houses, the high school long gone–but also a metaphor for a state-of-the-nation we sought to amend. As the motorcade snaked its way along the ridge leading out of town, it passed farms owned and preserved with great difficulty by generations of families; among the cattle and crops, as with my family’s farm, sat the giant strip pits–old enough to be unreclaimed–standing for another metaphor we invested in a candidate’s care.
I wonder how the folks in the video would react if the President’s bus stopped again, unannounced, in Smithfield. What would they discuss, what tone would this discussion take?  I ponder this as the video plays again, as the images begin to move like ghosts across the computer screen–a moment lost, a memory consigned to the past.

Aside from our own party preferences, there’s no denying that a sense of decorum has vacated our political discourse; while this is no doubt a reflection of our national recession–already mature in November 2008–it is also a comment on our willingness to think, with generosity and civility, beyond ourselves and beyond our own perspectives. Now, more than ever, we need artists to challenge our neighbors’ (and our own) frustrated myopia.