Walking the Fields, From Liberia to California

Posted by admin on Saturday, September 8, 2012 · Leave a Comment 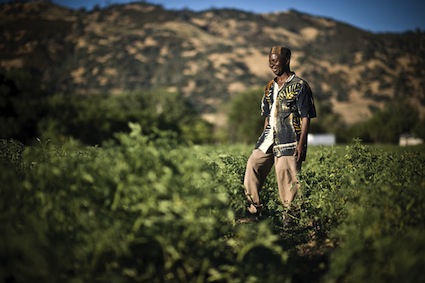 Sacramento Bee
High Country News has long been one of our favorite publications; they consistently think in new terms about the West, but also about urban-rural and rural-international connections. Such a perspective continues with “In Rural California, a Liberian Family Finds an Agricultural Refuge,” by Laura Markham.
Markham’s article offers not only an inspiring story of how immigrant families are contributing to local agriculture, but also a much-needed look into how African-Americans helped to transform such practices in the state last century. We’ll include an excerpt below:
On a historic 50-acre ranch in Northern California, Cynnomih Tarlesson and her nine children drop watermelon seeds into the ground. Behind them, her father, Roosevelt, uses a tractor to churn up the dirt for tomatoes, zucchini and eggplant — along with some lesser-known crops, like the Tarlesson-named ‘Billy Goat Pepper,’ from the family’s native West Africa.
When war erupted in her Liberian hometown in 1990, Cynnomih and her family fled their farm and lived for over two years in the bush, foraging for berries, shoots and small fish. After several years in a refugee camp in the Ivory Coast, Cynnomih, now 43, finally received permission to come to the U.S. as a refugee, along with 25 younger siblings and children (biological and adopted). They joined her father, Rev. Roosevelt Tarlesson, in Vacaville, Calif., where he had lived since the 1970s.
Vacaville was a peaceful escape from the harsh refugee-camp life in Ivory Coast — plenty of food, friendly neighbors and teachers assisting their transition to U.S. life. Yet in this suburban environment, the family’s job prospects were low and financial pressures high. They missed farming; they missed the land. So in 2007, the Tarlessons secured a loan to buy property in nearby Guinda, population 254. ‘When refugees are brought to this country, they are put in cities, making minimum wage at factories. Why? They know how to farm. Let them farm!’ says Rev. Tarlesson, who’s pushing this idea with resettlement agencies at the national level.
Continue reading here: