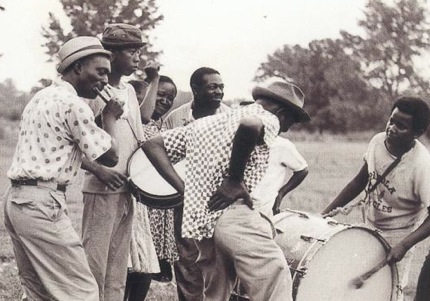 Napolian Strickland on fife, R.L. Boyce on snare drum, Othar Turner dancing; Blues Unlimited
Yesterday the Alan Lomax Archive Channel offered an update with a distinctive video of Napolian Strickland singing and providing his own accompaniment on the diddley-bow:
As the notes inform us, “Jesus Stop By Here” is “a variant of “Jesus Won’t You Come By Here” or “Daniel In the Lion’s Den,'” and the footage was filmed by Alan Lomax, John Bishop and Worth Long in 1978. Mr. Strickland, like Fred McDowell and a host of other Mississippi blues luminaries, hailed from the town of Como.
Folks can head over to the Association for Cultural Equity to learn more about Mr. Lomax’s work in this region, and the excellent Folkstreams site offers The Land Where the Blues Began, the film from which this outtake emerges.
In addition to this, The Cascade Blues Association offers an introduction to Mr. Strickland’s work, a portion of which is included below:

Of all the traditional styles of Blues music being played today, perhaps the fife and drum bands of Northern Mississippi just may have the deepest roots. The percussive sounds are almost a direct link back to the Western Coast of Africa, where slave traders took their heaviest toll; a land where stringed gourds, woodwind instruments and drums played a major role within the communities, and the memories continued with the poor souls being brought to a new land. The fife and drum bands thrived in the Hill Country of Mississippi for many years, with standout performers such as Sid Hemphill and his granddaughter, Jesse Mae, Ed Young and Othar Turner. But, as the practitioners of this music have been passing on, the tradition appears to be dying.

Another key member of the fife and drum family departed this world on July 21, 2001, as Napolian Strickland died following a stroke. Strickland was arguably the premier fife player of the genre, having appeared at numerous festivals, on several recorded compilations and on film in the documentary, “The Land Where The Blues Began”.