Welcome to Hollyrural: Notes Before The Oscars 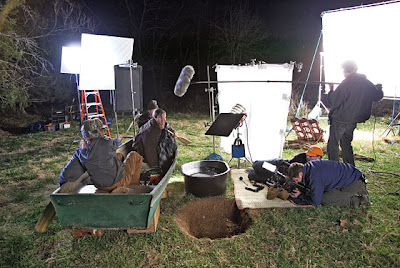 “Dale Dickey and Jennifer Lawrence shooting Winter’s Bone,”  Sebastian Mlynarski
This Sunday millions of viewers around the world will watch the Academy Awards. For the first time in a few years, the “Best Picture” category contains two films with rural roots: Winter’s Bone and True Grit. Later this week we will have the chance to hear from Rural Correspondent (and Ozark native) Rachel Reynolds Luster–an artist, musician, and graduate student in Heritage Studies. Ahead of hearing her perspective on these two films, we’d like to offer a list of articles and commentaries that we’ve recently read. Placed together, we see how both mainstream media outlets and rural writers and critics are considering this recent flowering of rural-themed cinema.
We’ll begin with the writing of Lisa Pruitt, a UC-Davis law professor and editor of the excellent Legal Ruralism blog. She has written a number of insightful commentaries on the issues of race, class and gender tangled up in Hollywood’s images of rural culture. In “Winter’s Bone and the Limits of White Privilege,” Dr. Pruitt critiques the intersections of pastoral imagery and the problematic idea of “white trash;” here are two excerpts:

Indeed, one of the very interesting things about reading NYT readers’ responses to “Winter’s Bone” and its review is the extent to which those from major metro areas — say New York and Toronto–criticized the film maker for the lack of reality and the way she maligned the place by showing junk cars and dogs in people’s yards. Film goers and readers from the Ozarks, however, generally agreed that the film was quite authentic in its depiction of people and place, though several of them pointed out that it showed only a particular stratum of that society. These differing views make me wonder if urbanites want to believe that rural life couldn’t be that bad? If they are clinging nostalgically to bucolic rural myths?

So what can we take away from Winter’s Bone regarding white privilege? I see Ree’s life as a reminder that when you get “down” to a certain socioeconomic stratum, there is precious little privilege or material benefit associated with being white. (I’m thinking the film “Monster” also illustrates this point). Another way of stating this is that disadvantages associated with class (e.g., bias against “white trash”) and geography (e.g., scarcity of jobs and opportunities) seriously undermine the white privilege that Ree might enjoy in other settings.

The Center For Rural Affairs and The Daily Yonder each linked to “It’s Cool To Be Country” by Adam Tschorn of the Los Angeles Times. Aside from a focus on True Grit, the article offers a wide catalogue of the ways that rural arts and culture are currently being enjoyed in the urban mainstream–through fashion, television, and popular country music icons such as Taylor Swift or Gwyneth Paltrow’s Country Strong character:

Even the recent fall/winter menswear runway shows in Milan and Paris found luxury brand collections taking inspiration from both the modern-day Amish (at Louis Vuitton) and the early settlers of the American West (at Dsquared2). Moonshine has become as trendy as absinthe. Canning and raising chickens have become hipster hobbies. And one of the most popular time-wasters on Facebook — played by nearly 55 million people this month alone — is a faux-farmstead game that has people harvesting virtual crops and tending to virtual livestock.

Lisa Pruitt, in “The Popularity of ‘True Grit’ as a Reflection of Nostalgia for the Rural?” considers a recent provocative editoral by Frank Rich in The New York Times (comparing True Grit and The Social Network) that considers rural space as a mutually-agreeable site for escapism on both sides of the culture war.  To boot, Dr. Pruitt finds in Mattie Ross a parallel to a public images of many of our country’s most successful female politicians, from Ann Richards all the way forward to Sarah Palin. She quotes here from Rebecca Traister’s “Only Cowgirls Run for Office”, originally published in The New York Times Magazine:

What we do have, to serve as the foundational fantasy of female strength and individualism we’ve agreed upon as embodying American power, are cowgirls: Annie Oakley, Calamity Jane, the outlaws, frontier women and pioneers who pushed West, shot sharp, talked tough and sometimes drew blood. Frontier womanhood has emerged as one of the only historically American models of aspirational femininity available to girls — passive princesses and graceful ballerinas not being native to this land — and one of the only blueprints for commanding female comportment in which they are regularly encouraged to invest or to mimic.

The Daily Yonder also published “And The Oscar Ought To Go To…” by Douglas Burns. He makes a compelling argument for Jennifer Lawrence’s portrayal of Ree Dolly, and for the ways in which such characters rarely surface in popular cinema:

Poverty in America is often given an urban black face. It’s a stereotype, also visible in any metro area, from Des Moines and Omaha, to Chicago and New York City.

Rural white poverty is very much alive and well, too, although not always easy to spot, as it hides around the mountain or off a country road, in an apparently abandoned trailer that is, surprisingly, a home.

“I hope you heard the hillbillies screaming,” laughs Beth Domann, one of the local actors featured in the movie, “because it started early. I think everybody’s real excited about it.”

As a closing link, Rachel Reynolds Luster has recommended this in-depth video interview from Cinema Blend with director Debra Granik; we can hear many of the questions and concerns raised by these previous links addressed by the woman who brought Winter’s Bone to life.

Here are the trailers for each film. The 83rd Academy Awards will be broadcast this Sunday evening on ABC.