What’s The Matter With Iowa? [Part 1] 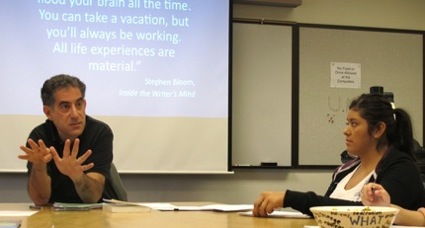 Stephen Bloom in the classroom; Reynolds School of Journalism, University of Nevada Reno
I’m sorry; this is the way I do it. This is called satire. This is called parody.
– Stephen Bloom, interviewed on NBC’s Rock Center
Many readers may already be familiar with the controversy that has been brewing in Iowa over the last few weeks, all of which began with the publication of University of Iowa journalism professor Stephen Bloom’s “Observations From 20 Years of Iowa Life” on The Atlantic site. The piece purports to be a pre-caucus overview of the political and cultural terrain of the state, but even a cursory reading suggests something more mean-spirited and off-balance:

But relatively few rural Iowans are employed in the business of wind energy. The bulk of jobs here are low-income ones most Iowans don’t want. Many have simply packed up and left the state (which helps keep the unemployment rate statewide low). Those who stay in rural Iowa are often the elderly waiting to die, those too timid (or lacking in education) to peer around the bend for better opportunities, an assortment of waste-toids and meth addicts with pale skin and rotted teeth, or those who quixotically believe, like Little Orphan Annie, that “The sun’ll come out tomorrow.”

There’s no shortage of reporting and commentary to emerge in the wake of Mr. Bloom’s piece: The Cedar Rapids Gazette offers a run-down of the published responses, as does The Atlantic itself, in the link presented above.
While a valid set of observations lay beneath the piece’s hyperbole, what’s perhaps most upsetting in the post-publication media attention is how Mr. Bloom asserts its satiric virtue. While it’s hard not to see the barely-concealed statements of self-superiority (the author was born in New York, educated in California and has lived in many “foreign countries”), it’s even harder to reasonably place the piece’s indebtedness to the satiric tradition of a writer such as Mark Twain, whom Mr. Bloom mentions in his piece.
The problem, of course, with this defense is that the professor is no longer offering such rationalizations to nineteen year-old students, but to reporters and commentators with a grasp of the tradition:
Not only this, but it pits a professor with a traditional journalistic upbringing against an insurgent movement of new media artists and practitioners. Iowans who would have traditionally only been students in his classes can now assert their perspective. As the two examples below illustrate, this generation understands the new rules of engagement, and this new media-language, perhaps better than their professor.
For instance, the artists and entrepreneurs of Iowa City’s Raygun have already détourned Mr. Bloom’s words: 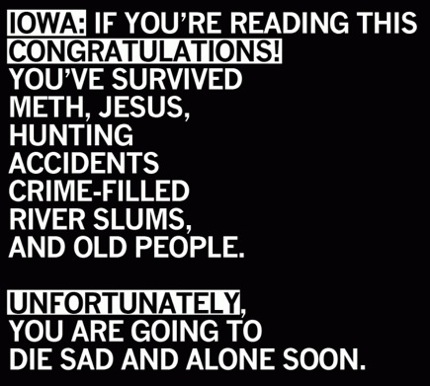 The Iowa Filmmakers also created this response both to Stephen Bloom and mainstream media coverage during the caucus; the video has since gone viral, and the “clean” version is presented below, though be warned that the censor missed a few offending words: